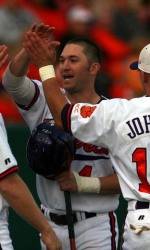 N.C. State Walks Off With 6-5 Victory Over #14 Clemson Friday

Wolfpack reliever Sam Brown (2-1) earned the win by retiring the only batter he faced in the ninth inning. Tiger reliever Alan Farina (4-3) suffered the loss, as he allowed two runs on three hits in 2.0 innings pitched. Starter David Kopp pitched 6.0 solid innings. He threw 14 groundball outs and no flyball outs.

After striking out eight times in the first three innings, the Tigers scored the game’s first runs in the top of the fourth inning. Wilson Boyd led off with a line-drive single to right-center and Marquez Smith followed with a bunt single. Andy D’Alessio moved the runners up a base on a sacrifice bunt, and Taylor Harbin’s groundout to second plated Boyd. Doug Hogan followed with a two-out walk. Then with a 2-2 count on Ben Paulsen, Hogan broke for second on Eric Surkamp’s first movement. Surkamp threw to Pat Ferguson at first, then Ferguson threw to second. But his throw was offline, allowing Hogan, who had stopped approximately 15 feet from second base, to walk safely to second base and Smith to score from third without a throw on the double steal.

N.C. State responded with three runs to take the lead in the bottom of the fourth inning. Ryan Pond drew a one-out walk and scored when Mike Roskopf golfed the first pitch of his at-bat over the fence in right-center for a two-run homer. It was junior’s 11th long ball of the season. Then with two outs and no one on base, Jeremy Synan singled up the middle. Marcus Jones followed with a hard-hit single through the left side. Ferguson then laced another single up the middle to score Synan.

N.C. State added to its lead in the fifth inning with a run. Pond hit a one-out double to left-center and advanced to third on Roskopf’s groundout to second. Pond then scored on a wild pitch, giving the Wolfpack a 4-2 lead.

Clemson came right back and tied the score in the sixth inning. D’Alessio blooped a one-out single down the right-field line and Harbin followed with an opposite-field, two-run homer to right field. It was his ninth home run of the season. It was also the Tigers’ first extra-base hit of the series.

The Tigers regained the lead in the top of the seventh inning with a run. Addison Johnson led off with a double down the right-field line and advanced to third on a passed ball. J.D. Burgess then laced a single to left-center to score Johnson. After two groundouts and with Burgess on third base, Smith hit a liner to center, but it was right at Jones for the inning-ending out.

Tommy Foschi quickly tied the score when he turned on a 1-2 fastball off Farina for a solo homer to left field to lead off the seventh inning. It was his third home run of the season. Dallas Poulk and Matt Payne followed with walks, then both advanced a base on Pond’s sacrifice bunt. But Farina worked out of the jam by striking out pinch-hitter Vince Gutierrez and Caleb Mangum to keep the score tied 5-5.

But two innings later, Poulk hit the first pitch of the bottom of the ninth off and over the top of the fence in right-center for the walkoff home run.

Poulk and Jones had two hits apiece to pace the Wolfpack, who had nine hits. Johnson led the Tigers with two hits, while Harbin totaled three RBIs. Neither team committed an error for the second straight game as well.

Clemson and N.C. State will conclude the regular season on Saturday at 1:00 PM. The game will be televised live by Regional Sports Network.