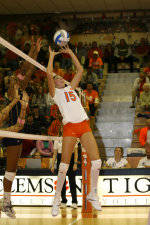 CLEMSON, SC – Junior setter Kelsey Murphy joined an exclusive list of Clemson volleyball players and the Tigers set a school-record for block assists on Sunday afternoon in their 3-1 (25-14, 23-25, 25-13, 26-24) defeat Florida A&M, concluding the 2008 Clemson Classic. She became the first player in program history to record a triple double in assists, blocks and defensive saves, while just the eighth to notch double figures in any trio of categories.

Murphy tallied a season-high 55 set assists in leading the Tiger offense to 63 kills and a .333 hitting percentage in the four-set match. The native of New Lenox, IL then aided the defensive effort with 11 digs and 11 block assists. Senior Danielle Hepburn posted 10 block assists as Clemson totaled 35 on the day, breaking the program record of 34.

The Tigers (8-4) accounted for 19 of the block assists during a third set in which they forced the Rattlers to hit negative with 10 errors compared to just eight kills. Murphy and Hepburn each tallied six in the set, while Brittany Fennell and Lia Proctor had three block assists apiece. Clemson adjusted to the hitting of Samara Ferraz by triple blocking the Florida A&M senior and she recorded just one kill in 13 attempts in the set.

Ferraz finished the match with a team-best 18 kills and was named to the all-tournament team with 40 kills and a.296 hitting percentage for the weekend.

The Rattlers (2-9) could not defend Hepburn in the opening set as the senior from Miami, FL posted eight kills in 11 attempts in the frame and was responsible for six of Clemson’s first , seven points. Ferraz recorded three straight kills of her own as Florida A&M rallied to cut the Tiger lead to 11-10. However, Clemson surrendered just four points the rest of the way for the 25-14 win. Freshman Lacy Hayes served six points that widened the gap and a four-point run culminated by an ace by Proctor closed out the set

The Rattlers then won their first set of the Clemson Classic, edging the Tigers 25-23 in set two.

Florida A&M opened the fourth set with three straight points and quickly jumped out to a 12-5 lead. Clemson chipped away at the Rattler lead and trailed by just two at 21-19. Kills by Maria Gomez and Ferraz put Florida A&M back ahead by four and the Rattlers had five chances to close out the set to force a deciding fifth. An attack error returned the serve to the Tigers and they never gave it back. Jeannette Abbott scored points 23 and 24 for Clemson to tie the set and an ace by Murphy sealed the victory.

The Tigers wrapped up the non-conference portion of their 2008 schedule on Sunday and will head to Virginia for the first weekend of ACC play. Clemson will take on the Hokies in Blacksburg on Friday night before facing the Cavaliers in Charlottesville on Saturday.