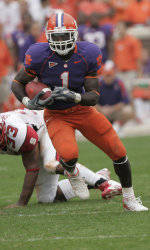 Quarterback Cullen Harper, running back James Davis, punter Jimmy Maners and center Ben Ramsey were all named most improved on the field and in the strength training room.