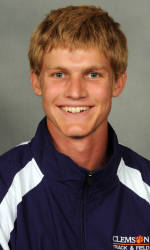 Watch Highlights from the Clemson Games on TigerCast!

Once again, Moss got off to a great start by easily surpassing his previous best in the 60m hurdles. The Sumter, SC product had a time of 8.28, best among the field of eight competitors. He continued his momentum with a clutch performance in the pole vault, as he cleared a personal best 15’1″ on his final attempt. He finished strong as well, turning in a time of 2:49.48 in the 1000m run.

Brianna Rollins was one of three female sprinters from Clemson to post an NCAA provisional qualifying time in the 200m dash. Rollins won the event with a 24.17, holding off teammate Kristine Scott (24.34) in the opening heat. Jasmine Edgerson claimed the second heat and was third overall with a time of 24.39, followed by Stormy Kendrick (24.41) in fourth.

La’Mont Jackson – were disqualified for lane violations. Fraser had a time of 22.02 in his first 200m dash as a collegian.

The Tigers won the men’s and women’s 4x400m relays, despite the fact that both lineups consisted of four freshmen each. The women’s group of Jordan Rispress, Jackson, Fraser, and Spencer Adams took first place with a time of 3:18.44. Adams regained the lead over the final 300 meters, just moments after being cut off by another runner.

Chris Slate captured the men’s 800m run after passing senior Will Noble in the final turn. Slate crossed the finish line with a time of 1:55.09, while Noble posted a time of 1:55.70. Ryan Mangone (1:55.74) made it a sweep of the top three positions after he nearly caught up with Noble at the line.

Kim Ruck demolished her competition in the women’s 3K Saturday. The sophomore from Greer, SC had a time of 9:36.80 and lapped the entire field. She was just shy of an NCAA provisional time, though she did record such a mark two weeks ago at the Virginia Tech Invitational. Bryce Iverson was the top performer in the men’s 3K, with a time of 8:45.53.

The Tigers return to action next weekend to compete in the Virginia Tech Elite Meet in Blacksburg, VA.