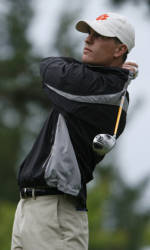 Clemson, SC – Recent Clemson graduate Phillip Mollica fired a second round 73 on the Cedar Ridge Country Club Course in Tulsa, OK on Tuesday and qualified for the match play portion of the United States Amateur.

Mollica finished his round early in the morning and when it did so it appeared he would not make the cut. But as the day wore on and scores came in higher with afternoon wins, he moved up the leaderboard. He finished in a tie for 45th place with 17 other players, but that was good enough to finish in he top 64.

Mollica had a 74 at Southern Hills on Monday, then shot 73 on Tuesday. His Tuesday round included two birdies.

Mollica will be joined in the match play championship bracket by current Clemson senior Ben Martin, who tied for second at 141 for the 36 holes of stroke play qualifying.