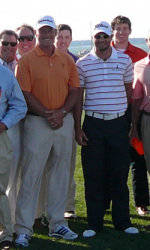 CLEMSON, SC – Clemson junior Corbin Mills shot a one-over-par 72 on Thursday in the first round of the RBC Heritage Golf Tournament on the PGA Tour. The event is being played at the par 71 Harbor Town Golf Links on Hilton Head Island, SC.

Mills, the only amateur in the field, is in 43rd place after the first round. The top 70 players and ties make the cut for the final two rounds. No active Clemson golfer has made the cut at a PGA Tour event since 1990 when Chris Patton made the cut at the Masters.

Mills is playing his second consecutive PGA Tour event. He shot a 155 and missed the cut at the Masters last week and now is playing the Heritage. He qualified for the Heritage by winning the Players Amateur last summer.

Mills hit the fairway in 12 of 14 drives and averaged 288 yards per drive. He made birdies on the first two par five holes (2nd and 5th), but made a double bogey on the eighth hole, the second hardest hole of the first round. He then made his third birdie of the front nine when he chipped in from 21 feet away for birdie. He made bogey on the 10th and 12th holes, then made par on each of the last six holes.

Mills is one of five players with ties to Clemson at the Heritage. Kyle Stanley had the top round with an even par 71 and is in a tie for 24th place. Lucas Glover tied Mills performance with a 72. D.J. Trahan had a 74 and Tommy Biershenk shot a 76.

The Clemson Alumni Association, IPTAY and Clemson Athletics kicked off the RBC Heritage tournament on Wednesday night in Hilton Head with an alumni gathering. If you plan to attend the Heritage, be sure to wear orange and stop by the Clemson tent at the 18th tee box.