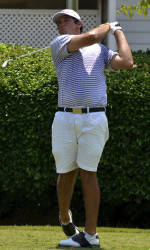 CLEMSON, SC – Clemson junior Corbin Mills saw his winning streak end, but he still finished a solid fourth at the Palmetto Amateur in Aiken, SC on Saturday. Mills had a 71 in the final round to finish with a seven under par 273 score for the 72-hole event. Will McCurdy won the tournament in a playoff with Nicholas Reach after both players shot 10 under par in regulation.

Mills birdied three of his last five holes, but it was not enough. Earlier this summer he won the US Public Links and the Players Amateur. Still it was a strong showing as Mills makes a run at a US Walker Cup team spot. His next tournament will be the Porter Cup in New York next weekend followed by the Western Amateur in two weeks.

Billy Kennerly, who will be a freshman at Clemson in August, had the best round of day among the seven current, former or future Tigers in the field with a four under par 66. The native of Alpharetta, GA made five birdies on the back nine to shoot 31 and finish with a 276 score for the tournament, tied for fifth place with former Clemson All-American John Engler, who had a 71 on Saturday.

Jacob Burger, who will be one of the senior leaders of next year’s Clemson team, had a 72 on Saturday and finished eighth with a 279 score. McCuen Elmore finished with a 293 score for the 72 holes, good enough for 38th place, while Crawford Reeves finished with a 294 score and was 42nd.