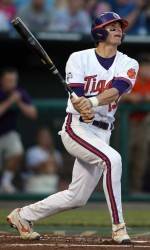 Junior infielder Brad Miller (Windermere, FL) and senior outfielder Jeff Schaus (Naples, FL) were both named to the Golden Spikes Award Watch List on Thursday. The watch list features 50 of the nation’s top amateur players. The award will be presented on July 11 in Phoenix, AZ. Former Tiger Khalil Greene won the award in 2002.

Miller hit a team-high .357 with 19 doubles, four triples, eight homers, 49 RBIs, and a .458 on-base percentage in 2010. The two-time member of the USA National team and 2010 All-ACC Academic team member finished the 2010 season in the top 10 in the ACC in walks, runs, hits, sacrifice flies, triples, and on-base percentage. Miller also batted .402 with a .533 on-base percentage, both marks second-best in the league, in ACC regular-season games and hit safely in 30 of his last 32 overall games in 2010.

Schaus was a Second-Team All-ACC selection in 2010 after hitting .320 with 15 homers, 14 doubles, two triples, and 87 RBIs in 70 games. His 87 RBIs tied for second-most in Clemson history and were fourth-most in the nation, including most in the ACC (next closest had 78), in 2010. He was instrumental in leading Clemson to the 2010 College World Series, as he was named to the Auburn Regional All-Tournament team and later was 9-for-15 (.600) with two doubles and five RBIs in three Clemson Super Regional games. After the season, he was drafted in the 27th round by the Cleveland Indians, but he elected to return for his senior season.