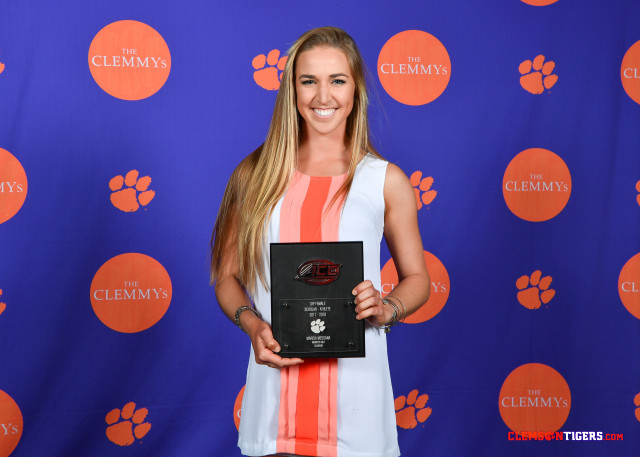 Clemson, S.C.—Clemson graduate golfer Marisa Messana was inducted into the Clemson Athletics Academic Hall of Fame at the CLEMMY Awards on April 16. The event, that honors Clemson student-athletes in all sports for their prowess on the field of play and in the classroom, was held at Littlejohn Coliseum.

Messana is one of the most academically decorated student-athletes in Clemson history. The native of Fort Lauderdale, Fla. graduated in December with a perfect 4.0 GPA. She has continued her academic and athletic career as a graduate student this spring.

As a starter on Kelley Hester’s team, Messana helped Clemson to its first NCAA National tournament appearance and a No. 20 final ranking last year. This year she is again a starter on a Clemson team ranked in the top 30 in the nation that will compete for the ACC Championship this weekend in Greensboro.

In addition to being inducted into the Clemson Academic Hall of Fame on Monday, Messana was named to the All Academic Team at Clemson, received one of the Athletic Director Academic Excellence Awards for posting seven consecutive semesters on the dean’s list (she had a 4.0 every semester), and was recognized as Clemson’s female ACC Scholar Athlete of the Year.

Messana also received the Solid Orange Athlete award, which is given to a male and female student-athlete who best demonstrates leadership, athletic performance, service academics and sportsmanship

Earlier this month, Messana was honored by the ACC with an ACC Postgradaute Scholarship. She is a three-time member of the All-ACC Academic women’s golf team and is a three-time selection to the All-America Scholars team as chosen by the Women’s Golf Coaches Association

Her most noteworthy honor might have come last year at the NCAA National Championship when she won the Elite 90 Award. That honor is given to the top student-athlete participating in the NCAA National Women’s tournament.