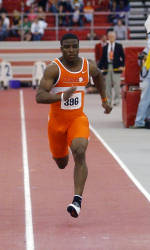 Clemson, SC – The Clemson men’s track & field program will travel to Atlanta, GA this week with its usual high hopes of winning an ACC outdoor championship. The Tiger program not only boasts some of the top student-athletes in the conference, but also will receive a major boost by the return of Jacoby Ford to the track. Ford, nursing a broken ankle since football season, will run this weekend in the 100m dash for Clemson. The meet will begin Thursday and finish Saturday at Georgia Tech’s George C. Griffin Track complex.

The return of Ford gives Clemson an outstanding group of sprinters in the 100m dash. Like Ford, fellow two-sport standout C.J. Spiller will also return to track this week. He has not competed since finishing 10th in the 60m dash at the NCAA Indoor Championships in early March. The favorite heading into the weekend will be Travis Padgett, two-time defending league champion in the event. The 100m prelims will be Friday at 4:00 PM, with the final scheduled for Saturday at 2:30 PM.

The Tigers should also have a good shot in the 4x100m relay, which will be held Saturday at 1:00 PM. Clemson’s best time in the event so far this season was a 40.07 at the Auburn Tiger Classic two weeks ago. That group was comprised of Padgett, Trenton Guy, Corey Brown, and Cowin Mills.

Clemson is the defending champion in the 4x400m relay. Last season, Mills and Brown teamed with Andrew Porter and Travis Swaggard to win the event with a Kehoe Track (University of Maryland) record time of 3:09.89. The 4×4 group will be looking for its first regional-qualifying time of the 2008 season Saturday at 4:30. Porter and Swaggard give Clemson a formidable 1-2 punch in the intermediate hurdles. The prelims for that event are set for Friday at 5:00 PM.

Six student-athletes will be entered in the 200m dash Friday for Clemson, led by 2007 All-ACC honoree Travis Padgett. Brown and Mills are scheduled for the quarter mile prelims at 3:30. Clemson will have just one entry in both the 800m, 1500m, and 3000m steeplechase. The Tigers will have four entered in the 5000m race Saturday, which is scheduled for 3:35 PM. Matt Clark was All-ACC in the event last season and competed at the NCAA Championships in the 5K. He recently set the school record and qualified provisionally for the NCAA Championships in the 10,000m. Sam Bryfczynski, Matt Bruce, and Matt Hughes will join Clark in the 5K run Saturday.

In the field, Clemson’s top performer is without a doubt Joey O’Rourke are also entered for Clemson in the event.

The field event action gets underway Thursday in Atlanta. Zach Berg and Alex Padgett are scheduled for the hammer throw at 9:00 AM. The decathlon, which will be split into five events Thursday and Friday, will feature three student-athletes from Clemson. Miller Moss and Mike Feathers figure to be All-ACC contenders. Scott Pauga will also throw the javelin Thursday at 3:00 PM.

The long jump, high jump, and shot put will be held Friday. The shot put and high jump are set for noon. George Fields has worked his way back into form, and hopes for an All-ACC finish in the long jump starting at 12:30 PM. The field event action closes out Saturday with the discus (10:00 AM) and triple jump (11:00).