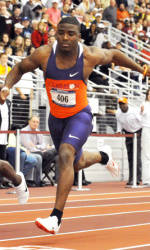 Clemson, SC – The Clemson men’s team jumped an incredible 31 spots in the latest calculations by the U.S. Track & Field and Cross Country Coaches’ Association (USTFCCCA), which were announced Wednesday by the organization. The Tigers now rank #26 in the nation, thanks in large part to the outstanding performances from the sprint group last weekend at the Orange & Purple Classic.

Jacoby Ford is atop the individual rankings for the 100m dash for the first time in his decorated career. The reigning NCAA champion at 60 meters will be seeking his first-ever crown in the 100m dash over the next month. Ford posted a sizzling 10.11 over the weekend, with an NCAA-legal +2.3 tailwind. His time ranks fourth-best in school history.

Not far behind Ford last Saturday was football teammate C.J. Spiller, who ran a personal best 10.22 in the breezy conditions. Spiller now ranks among the top 10 in the 100m dash in Clemson history as well. He ranks #7 nationally in terms of his time in the event.

Justin Murdock and Trenton Guy, both of whom recorded personal bests in the 100m dash last weekend, ascended the national list as well. Murdock (10.30) ranks 14th in the country, while Guy’s time (10.34) is 22nd-best among NCAA competitors.

The four sprinters are also responsible for the nation’s sixth-best time in the 4x100m relay. Clemson posted a 39.33 in its fourth-place finish at the Penn Relays last month. The Tigers will look to earn qualification from the East Region in a couple of weeks, after a disappointing showing at the 2008 meet.

Ford, Spiller, and Murdock are also nationally-ranked in the 200m dash. Ford owns the team’s top time this season at 20.88, which is good enough for #36 on the national list. Spiller is right behind at 20.91, 40th-best in the nation. Murdock ranks outside the top 50 individually, but set his personal best over the weekend with a 21.02 at the Orange & Purple meet.

The men’s and women’s teams will return to action this weekend in Atlanta, GA to compete in the Georgia Tech Invitational.