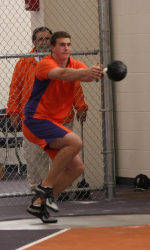 Clemson will begin competition at the 2006 NCAA East Region Championships on Friday, May 26. The Tigers’ first event will be the hammer throw at 11:00 AM. Danny Alge will compete for Clemson in that event.

At noon on Friday, freshman Andrew Kessler, will compete at 3:00 PM. The first running event for the Tigers on Friday will be the prelims of the 4x100m relay at 4:15. That team will consist of Roy Cheney, Corey Brown, Travis Padgett, and Cowin Mills.

Cheney will also compete in the prelims of the 110m hurdles at 5:40. Joining him in that event will be Lydell Perry and multi-events athlete Brent Hobbs.

Saturday will feature finals of all running events, in addition to three other events in which Clemson has an athlete competing. At noon, Jason Bell will compete in the triple jump. Adam Linkenauger is set for the high jump at 5:00 PM, while Itay Magidi will run the steeplechase at 8:05.

Tigers in the Outdoor Record Books Clemson has several performers ranked in some capacity among the school’s all-time leaders in outdoor events.

In the distance events, Magidi ranks among the top five leaders in Clemson history in both the 3000m steeplechase and 10,000m. He accomplished his personal best in the 10,000m in April at the Stanford Invitational. He ranks second all-time in Tiger track & field history in the steeplechase (8:34.12). Jason Bell ranks third all-time in the outdoor triple jump. He posted a mark of 51’6.25″ last season.

Mitch Greeley, an NCAA Indoor All-American, is first all-time in Clemson history in the outdoor pole vault ranks. He also ranks first on the Tigers’ all-time indoor list. Greeley cleared 17’5″ at the Orange & Purple Classic to eclipse the previous record of 17’4.5″, set by Jeff Fields in 1990.

In the hammer throw, junior Danny Alge ranks second all-time in that event after posting a toss of 200’9″ at the Solid Orange Classic. The school record-holder in that event is Matt Helinski, who threw 204’1″ in 1997.

Ryan Koontz moved into the top five all-time in Clemson’s decathlon records after winning the ACC title with 7,371 points.

Clemson’s NCAA East Region History In the three years the regional format has been used, the Tigers have finished in the top five as a team each time at the East Region Championships. Last season, Clemson took home a fifth-place team finish and advanced five individuals to the NCAA Championships. Three Tigers have won event titles at the East Region Championships, with each of the three occurring in 2003. Itay Magidi, currently a junior on the Tiger team, won the 3000m steeplechase. George Kitchens won the long jump title as well that season.

Clemson has had 13 All-Region performers (including champions) in the three years it has been held. Currie, Kitchens, and Magidi are all multiple All-Region honorees.