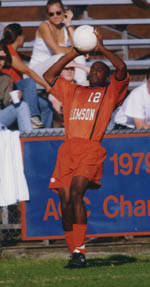 Freshman Oguchi Onyewu scored the first two goals of the match, one minute apart as the Tigers built an early lead and eventually put away the Wolfpack from NC State. Forward Fabio Tambosi also registered two goals as the sophomore from Sao Paolo, Brazil scored the last two Tiger goals increasing his team-leading goal count to eight. Senior Pablo Webster had a brilliant game out of the backfield for Clemson, tallying a hat trick of assists. Webster was involved in the first three Tiger scores.

Senior Mark Lisi would add a goal and two assists and Junior Ross Goodacre dished out his seventh assist of the season and scored his third goal. Goodacre leads all Tigers with the seven assists.

Junior Lee Baldwin had the goal for NC State off an assist from senior Tony Malcolm.

This was Clemson’s worst defeat of an ACC team since the Tigers beat North Carolina 5-0 on September 13, in the 1998 season. This was also the Tigers worst defeat of the Wolfpack since a 5-0 win in the ACC Tournament in Durham, NC on November 9, 1995.

“This was an important game for us being an Atlantic Coast Conference match,” said Clemson’s head coach Trevor Adiar. “We always have close matches with NC State. I was very happy to get a win today. Oguchi was a big weapon for us in today’s match. After we built a 3-0 lead we relaxed and they fought back. We settled down and scored two goals and we took control again.”

“Fabio has established himself as someone who can score twenty goals in a season. He did a great job today.”

The Clemson Tigers will play again Friday, September 29 and Sunday October 1 as they play host to the Clemson Nike Invitational. The field includes Clemson, Brown, Furman and Cal St.-Fullerton.