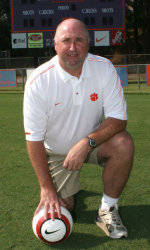 Bell is a transfer from Berry College. Last year during his sophomore campaign, he scored nine goals and had seven assists for 25 points. He led his team to a 15-6 record in 2005. In 2004, he was named All-Region and was an honorable mention All-American as he scored 15 goals and 11 assists for 41 points. That same year the Vikings reached the national semifinals in the NAIA National Championships.

Parrish, finished the 2005 season with seven goals, two goals and 16 points. He was named second-team All-Southern Conference. He led the Mountaineers in scoring and started all 18 matches last season.

Moojen, a native of Balneario, Brazil was the 2004 and 2005 Gulf South Conference Player of the Year and was named first team All-Conference both seasons at Lincoln Memorial University. In 2004, he scored 23 goals and had seven assists for 53 points. In 2005, He scored 25 goals and had six assists for 56 points. Last season, he was a third team NSCAA All-American. Moojen also led the Premier Development League with 18 goals and seven assists in 2005.

Eckhardt, a native of Orange Park Florida, played club soccer for Clay County Soccer Club. Eckhardt is also a member of the U17 and U18 National Team. He attends the national residency program at Edison Academy.

“Our transfers enrolled at Clemson in January and trained this spring and made significant contributions. It is great to have Bell, Parrish and Moojen here early. They learned our system and will make great contributions to our team this fall. “Eckhardt is a solid defender coming in this fall. He has played at the highest level. He has a great work ethic and we feel he will contribute right away.”