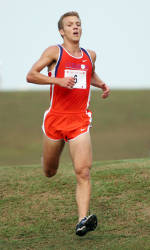 Clemson, SC – The Clemson men’s team will begin its 2007 cross country season this weekend at the Western Carolina Invitational in Cullowhee, NC. It will mark the first of two meets Clemson will participate in at the school. The meet is scheduled for Friday at 5:45 PM.

Head Coach Bob Pollock has decided to travel just five of his student-athletes, including four first-year performers. Will Noble, a red-shirt sophomore, will make the trip to Cullowhee. He will be joined by red-shirt freshman Dan Cartica, who has been strong in practice so far this season. Three true freshmen will join those two in the lineup. Chad Holt, a local product from Mauldin High School, will compete in his first-ever collegiate cross country race. Tyler Morey, a Wisconsin native, and Jonathan Sunde, a walk-on from Charlotte, NC, will round out the Tigers’ lineup.

The race will be a four-mile competition and will feature six schools in total. Joining Clemson and host Western Carolina will be local colleges Mars Hill, Montreat, Carson-Newman, and Gardner-Webb.