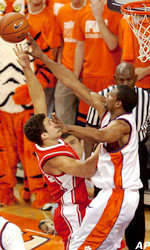 Clemson senior Sharrod Ford had his 18th career double-doublein the loss to NC State when he had 19 points and 10 rebounds. Itwas his second consecutive double-double, as he had 20 points and15 rebounds at Miami (FL) in the previous game. This is the fourthtime in his career that he has had consecutive double-doubles. Hehas never had three in a row. Ford needs 28 points against Marylandto become the 29th player in Clemson history to score 1,000 points.It would be special for Ford to do it against the Terps because heis a native of Suitland, MD. Clemson freshman Cliff Hammonds had 17points on 7-13 shooting, four assists and three rebounds against NCState in a team high 35 minutes. Hammonds also scored in doublefigures at Miami (FL) last week and has now made 11 of his last 22shots from the field, including 6-15 on 3-point tries. Clemsonfinished the first half of the ACC schedule with a 1-7 record, theeighth straight year Clemson has been 2-6 or worse over the firsthalf of the regular season ACC slate. But, Clemson had to play fiveof the first eight games on the road and two of the home games wereagainst top six teams Wake Forest and North Carolina. Clemson hashad five games come down to a three-point attempt within the last10 seconds of the game. Clemson is 2-3 in this situation. All threelosses have come within Clemson’s last three road games. Clemsonhas lost four ACC road games by 16 total points. Last year Clemsonlost eight ACC road games by an average of 16 points. Clemson haslost 13 consecutive games to Maryland, the second longest activestreak by one ACC team over another. Last Wednesday, Florida Stateended a 12-game losing streak against NC State. Clemson has notdefeated Maryland since Rick Barnes was the coach of the Tigerprogram. Clemson must improved its field goal percentage defense ifit is to end its five-game losing streak. NC State shot 63 percentfrom the field against the Tigers in the most recent game, the highfield goal percentage by a Tiger opponent in the 48 games OliverPurnell has served as Clemson coach. The Pack’s 65 percentthree-point marksmanship (13- 20) was a record for a Clemsonopponent in Littlejohn Coliseum. Eleven of the last 13 Clemsongames, the team that has won the first five minutes of the secondhalf has gone on to win the game. Oliver Purnell served as anassistant coach at Maryland from 1985-86 through 1987-88. The Terpswent to two NCAA Tournaments in those three years.