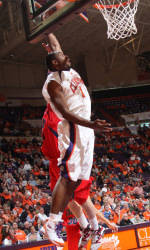 Quick Facts  Saturday’s game will be the ninth meeting between Clemson and South Carolina State. The Tigers hold a 7-1 advantage in the series. The Bulldogs won the 1999 meeting against Clemson.

 The Tigers, one of just 15 unbeaten teams remaining in Division I, are #2 in the latest RPI and #7 in the latest computer ratings by Jeff Sagarin. Seven teams the Tigers have defeated currently rank in the top 100 of the RPI.

 K.C. Rivers matched his career-high with 32 points in the comeback win over Liberty. He scored the Tigers’ first 14 points of the second half and nine inside the final four minutes of the game. He also added 11 rebounds in his best all-around effort of the season.

 Terrence Oglesby has made at least one threepoint goal in 17 consecutive games, dating to the final portion of the 2007-08 season. He leads the ACC in three-point goals per game (2.7) and accuracy (.444).

 Trevor Booker leads the ACC with 2.7 blocked shots per game. As a team, Clemson leads the ACC in blocks per game (7.0) and ranks seventh in the NCAA in the statistic as well.

 Through nine games, Clemson is shooting at outstanding percentage from the field. The Tigers have made 50.4 percent of their attempts, which ranks 11th in the nation according to the latest statistics from the NCAA . Clemson has shot over 50 percent as a team in each of the last four games.

 Over the last two games, Demontez Stitt has tallied 17 assists compared to just three turnovers. He had a career-high 11 assists in the Liberty win.