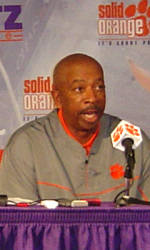 Clemson, SC – The Clemson men’s basketball program announced the signing of three prospects to national letters of intent on Wednesday, the first day of the early signing period. Clemson’s 2009-10 freshman class will include Milton Jennings, a 6-9 forward from Summerville, SC, Devin Booker, a 6-7 forward from Whitmire, SC, and Donte Hill, a 6-5 guard from Virginia Beach, VA. Clemson’s recruiting class is already ranked as high as #18 nationally by Scout.com.

“I think thus far we’ve put together an outstanding class for 2009,” said Oliver Purnell, Clemson’s sixth-year head coach. “We’ve added nice size, but have not sacrificed athleticism or skill. These guys are quality prospects and people.”

Jennings is rated as a top 50 prospect by nearly every major recruiting service and is arguably Clemson’s highest-rated signee in men’s basketball since Sharone Wright in 1991. Jennings is listed as the nation’s #12 prospect, regardless of position, by Rivals.com. He is also #16 according to ESPNU and Prep Stars, #23 by Scout.com, and #33 by Hoop Scoop. Jennings chose to sign with the Tiger program over scholarship offers from Florida, Connecticut, Georgetown, and UCLA.

Jennings has scored over 1,800 points in his decorated prep career heading into his senior season at Pinewood Preparatory School. He averaged 18.9 points, 10.6 rebounds, and 4.2 blocked shots per game as a junior when he was named South Carolina’s Gatorade Player-of-the-Year. He has led the Panthers to three straight SCISA championships at the Class AAA level.

“Milton is a very skilled big man with tremendous versatility,” Purnell said. “He has loads of potential and the sky is the limit for how good he can be.”

Booker is a familiar name for Tiger basketball fans, as his older brother, Trevor, is a junior standout on Purnell’s team this season. The younger Booker is rated as high as the nation’s #65 prospect by Scout.com. The 225-pound power forward is also ranked #66 in the nation by Prep Stars and is a member of the top nation’s top 150 according to Rivals.com and Hoop Scoop.

Booker averaged 22.1 points, 14.6 rebounds, and 3.3 blocked shots per game as a junior for Union High School last season. An All-Region player, he made over 60 percent of his field goal attempts. He had a season-high 34 points against Greer High School and pulled down 22 rebounds the same week in a game against Riverside (Greenville, SC).

“Devin is a powerful inside player who is continuing to expand his game,” Purnell said. “He is a tremendous rebounder at the high school level and has the potential to do the same at the next level. I know his brother doesn’t want to hear it, but he’s got a chance to be as good or better than him.”

Hill comes to Clemson from the Norfolk Collegiate School, the same school that produced Tiger junior Karolis Petrukonis. The wing player is ranked as high as the nation’s #109 prospect by HoopsReport.com. Hill, who averaged 20.3 points and 7.9 rebounds per game as a junior, is also cited as a three-star prospect by both Rivals.com and Scout.com. The All-Tidewater performer chose Clemson over offers from Marquette and Old Dominion.

“Donte was the best perimeter defender I saw all of last year,” Purnell said. “Yet, he possesses the ability to score and make his teammates better on the offensive end. At 6-5 with long arms, he has the potential to be a Cliff Hammonds-type contributor.”