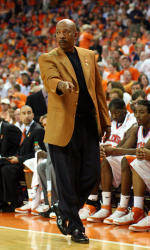 Clemson, SC – The men’s basketball schedule was announced Thursday by Head Coach Oliver Purnell. The Tigers’ 30-game slate will be highlighted by seven nationally televised contests, most at Clemson since the 1997-98 season. Seventeen games will be televised overall, including 13 league contests. Clemson will also face four SEC opponents for the second straight year. A trip to San Juan, Puerto Rico is also a highlight of the Tigers’ non-conference schedule.

“Our schedule is obviously very exciting this year,” Purnell said. “Our non-conference schedule presents some strong challenges for us on the road, as well as at home. The national exposure afforded to us by our television package is the best Clemson has had in many years. We look forward to the challenges that lie ahead this season.”

Clemson was 4-0 versus the SEC last season, the first time in school history the program posted at least four wins over the SEC in the same season. Two of the four games versus SEC foes will be on the road. Clemson plays at Mississippi State on November 15 and at Alabama on New Year’s Day. The Tigers defeated the Bulldogs, 69-66, in an early season game last season. This will mark the first time Clemson and Alabama have squared off since the 1989 San Juan Shootout. The Crimson Tide have advanced to the NCAA Tournament five of the last six seasons.

The Tigers will play host to in-state rival South Carolina on December 1 and will face Ole Miss for the second straight year. Clemson has claimed three straight in the series versus the Gamecocks. Fox Sports South will televise the Tigers’ games with Alabama, Mississippi State, and South Carolina.

Clemson’s non-conference schedule will also include an ESPN-2 home contest with Purdue on November 27 in the Big Ten/ACC Challenge. The Tigers are 6-2 all-time in the challenge, with one of the losses coming at Purdue during Purnell’s first season at Clemson.

For the second time in three seasons, Clemson will compete in the San Juan Shootout in Puerto Rico. The Tigers will face Puerto Rico-Mayaguez in their opening game before playing 2007 NIT participants DePaul and Ole Miss to conclude the event. Clemson defeated the Rebels by 21 at home to end their 2006-07 season.

Other non-conference highlights include home games versus 2007 NCAA Tournament team Old Dominion on November 18 and Charlotte on January 9. The Tigers downed the Monarchs, 74-70, last season to claim the Cox Communications Classic. Purnell is an alumnus of ODU and served as the school’s head coach from 1991-94.

The ACC schedule begins with three consecutive home games for the first time since the 1988-89 season. It will start with a nationally televised Sunday evening game against North Carolina on January 6. It marks the first time the Tigers will start conference play facing the Tar Heels since the 1999-2000 season. Florida State and N.C. State come to Littlejohn Coliseum on January 12 and January 15, respectively.

Clemson’s first road game in conference play will be at Cameron Indoor Stadium at Duke University on January 19. The game will be televised by ESPN at 6:00 PM. The Tigers played well at the Blue Devils’ home last season, before falling on a buzzer-beater.

Clemson will face Boston College at home on February 2 before going on the road for six of their last nine ACC games. Following the game versus the Eagles, Clemson will face Virginia and North Carolina on the road on national telecasts. The Tigers will be making their first trip to John Paul Jones Arena, the new home of the Cavaliers, on February 7 in a game that will also be shown on the ESPN family of networks.

The Tigers travel to Maryland and Georgia Tech to begin the month of March, before returning home for Senior Day and the end of the regular season versus Virginia Tech on March 9. Clemson has won at Virginia Tech the last two seasons on the Hokies’ Senior Day. It will mark the fourth straight year the two teams have played on a Senior Day. The Tigers claimed a memorable last second win on Sharrod Ford’s dunk for the 2004-05 Senior Day.

The ACC Tournament will be held close by in Charlotte, NC this season. The games will be played at Bobcats Arena. The tournament is scheduled for March 13-16.