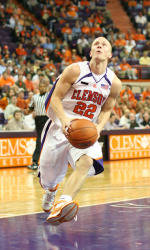 Clemson, SC – The men’s basketball team is ranked in both the Associated Press and ESPN/USA Today polls released Monday. The Tigers are off to a 3-0 start this season, which includes an 84-82 win on the road at Mississippi State. Clemson is 22nd in the coaches’ poll and 24th according to the AP.

It marks the first time since November 18, 1996 that Clemson is ranked in both football and men’s basketball in the same week. The Tiger football team is 21st in this week’s AP poll and #22 in the coaches’ rankings. It also marks the earliest the Tiger basketball program has been ranked in a season since 1998-99, when Clemson was 24th in the AP poll on November 15.

Clemson is one of six programs nationally ranked in the top 25 of the AP college football and men’s basketball polls:

Clemson began the basketball season with a 91-46 victory over Furman, then squeezed out the two-point road win in Starkville, MS on Thursday. The Tigers completed the 3-0 week with a 66-53 win over Old Dominion, an NCAA Tournament team last season, on Sunday. Senior forward James Mays posted a double-double in the latter two games.

The Tigers play a pair of home games this week. Clemson will host Presbyterian on Wednesday night at 7:30 PM, the first meeting between the in-state schools since the 1982-83 season. The Tigers then host Gardner-Webb out of the Atlantic Sun Conference on Saturday at noon.