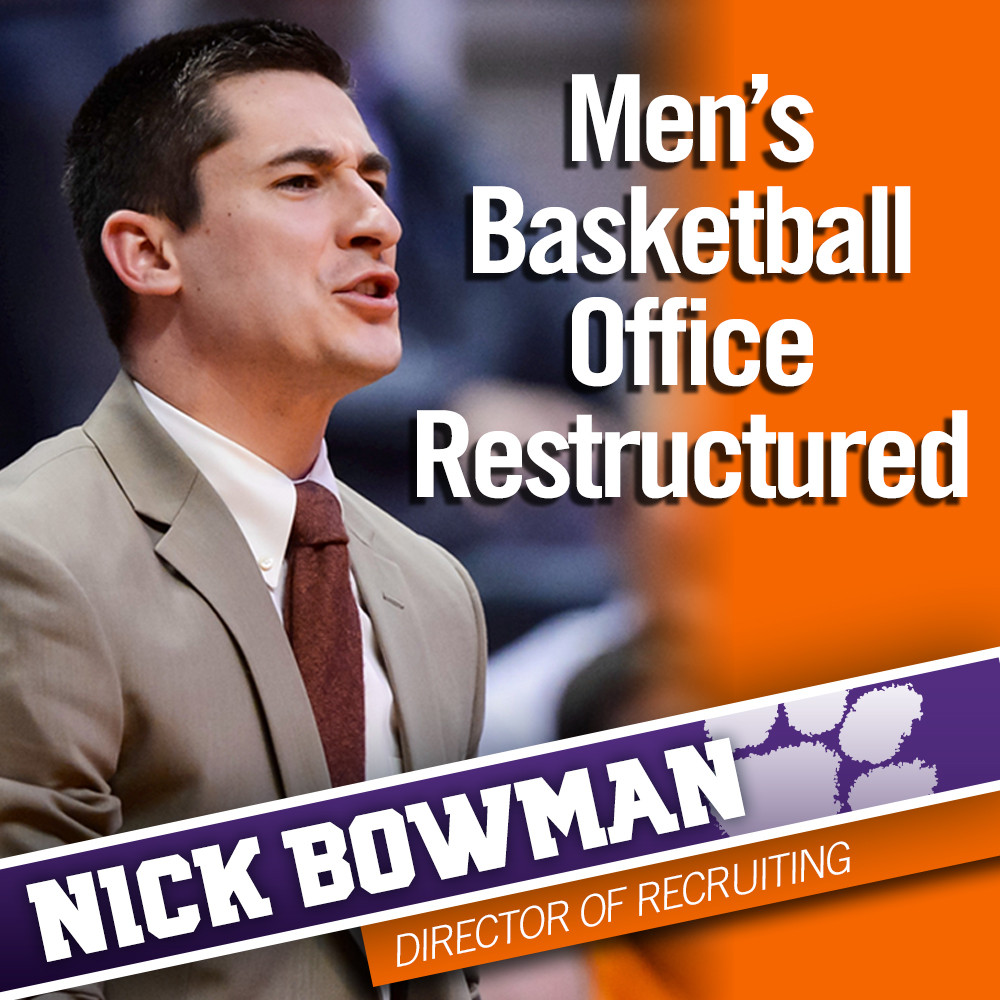 The men’s basketball office will take on a different look this fall.

Nick Bowman, most recently the director of basketball operations at Eastern Kentucky University, has been added as the program’s first director of recruiting. The hire didn’t happen by simply adding a position, however. It was the product of a gradual shift within Brad Brownell’s office structure.

Longtime administrative assistant Keshana Ham accepted and recently moved into a position to serve as a coordinator with several of Clemson’s Olympic sports programs. With her departure, it opened the door for Brownell to tinker with the office’s traditional staff setup.

“With Keshana leaving — and we want to congratulate her on the promotion — it became a situation where we could shift from an administrative assistant to this (director of recruiting) position,” Brownell said. “When I was at Wright State, when we didn’t have as much personnel, I hired Lucas (McKay) instead of a traditional administrative assistant because he had some basketball experience. I’ve thought about that since I’ve been here. I thought we needed to go in that direction.”

Direction of the program has been on Brownell’s mind a lot lately. He and director of athletics Dan Radakovich had candid discussions within the last 18 months about the current state of college basketball, specifically the growing trend of recruiting through social and digital media.

“Dan and I talked about the way things had changed,” Brownell said. “We’ve done things in our athletic communications office, where we’ve changed our angle and have been more involved in the digital and social media realms. It was apparent that for us to do the kind of job we need to do, it would be very beneficial to have someone that could focus on getting the message out to fans and recruits.”

And that’s where Bowman comes in. Brownell tapped his good friend Jeff Neubauer for the second time in as many seasons, this time plucking Bowman after securing assistant coach Richie Riley — a former Neubauer assistant — last fall.

In his new role, Bowman is charged with assisting the staff with recruiting and branding. He will help generate new ideas for promoting the program’s message points.

“His job is focused, and it’s easier that way,” Brownell said. “Coaches can have too much on their plates. It’s hard to tie it all together, and to make sure we do that with the various messages we want to promote, that’s where Nick helps us. We’re fortunate to get him, because he had an opportunity to go with Coach (Jeff) Neubauer to Fordham. He’s worked for Cuonzo Martin at Tennessee when they went to the Sweet 16. He’s been part of successful programs, knows the job and has hit the ground running.”

He’s not the only new face around the office, either. The hiring of talented student workers to fill specific roles — much like Thad Turnipseed has done in the football recruiting office — has been implemented.

Last season, Charlie Maikis joined the office staff with a focus on statistics and analytics. This summer, Heather Montgomery joined the group as a graphic designer to help overhaul the program’s efforts on social and digital media. Even senior guard Jordan Roper has played a role. An intern this summer with Clemson’s athletic communications office, Roper has produced several short-form videos with the same goal in mind — promoting the program.

It’s a collaborative effort, one Brownell sees as an overwhelming positive for the program moving forward.

“Rules have changed with regard to recruiting communication, and we’ve tried to keep up with the times,” he said. “We are always looking for better ways to recruit and promote our program.”