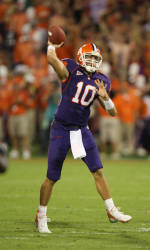 Clemson, SC-Six Clemson football players are listed as candidates for two awards announced by the Maxwell Football Club on Monday. Club President Ron Jaworski announced 75 candidates from around the country for the Maxwell and Bednarik Awards, respectively.

Four Clemson offensive players are on the list of 75 candidates for the Maxwell. The group of Tigers includes running backs James Davis and Aaron Kelly and quarterback Cullen Harper. Clemson, Oklahoma and Southern California were the only schools nationally to have four candidates on the list.

Clemson safety Michael Hamlin and defensive end Ricky Sapp are the Clemson candidates for the Bednarik Award. Hamlin was a candidate for the honor last year.

Clemson is one of just three schools nationally with a returning 2000-yard passer, 1000-yard rusher and 1000-yard receiver. Harper threw for 2991 yards and 27 touchdowns last year when he was first in the ACC in passing efficiency and set 21 Clemson records. Davis rushed for 1064 yards and has been a first-team All-ACC player each of the last two years.

Kelly had 88 receptions, including 11 catches that went for touchdowns last year to establish Clemson records in both categories. He needs 52 receptions to become the ACC’s career leader. Spiller led Clemson in all-purpose running yards last year with 1732 and he was the most valuable offensive player of the Chick-fil-A Bowl when he had an 83-yard touchdown run, the 10th score of at least 50 yards in his two years at Clemson.

Hamlin has 12 career takeaways an had 97 tackles in 2007 when he helped the Tigers to a top 10 national ranking in scoring defense and total defense. Sapp is Clemson’s top returning player in terms of quarterback sacks and he had 52 tackles, including 10 for loss.