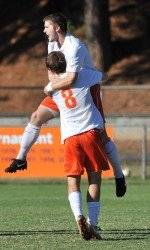 Maryland Defeats Clemson 2-1 in the Quarterfinals of the ACC Men’s Soccer Tournament Austin Savage scores for the Tigers.

CARY, NC–Billy Cortes scored one goal and assisted on the other in leading third-ranked Maryland to a 2-1 win over Clemson in the quarterfinal round of the 24th Annual Atlantic Coast Conference Men’s Soccer Tournament at Cary, NC Wednesday afternoon.

Maryland, seeded second in the tournament, improves its record to 15-2-1 this season. Clemson, seeded seventh finishes the year with a 5-9-4 record. Maryland is ranked third nationally.

The Terrapins have given up only 12 goals this season, three of those goals have been given up to the Tigers this year as the Terrapins defeated Clemson 3-2 on October 16. Coming into today’s match Maryland had not give up a goal in 293 minutes or three straight games.

“Maryland is a good team, and I give them a lot of credit,” said Noonan. “I’m very proud of the kids, and I think we are a tough out. I think people are starting to know that when you play Clemson, it’s not going to be an easy game. I think we played well, but not enough quality to win the game. I thought Cody Mizell played well in goal today.

“He’s been outstanding and he’s a national caliber goalkeeper, there’s no question about it. He’s been outstanding this season. Cody played well today and managed the game well. He’s picked up our team in so many ways, so often this season. We’re happy that he is playing for Clemson,” continued Noonan. “We changed the way we were playing about 15 minutes left to go in the game. I thought we had a great game plan and it was effective. We executed well today, but the lack of a little bit of quality let us down,” said Noonan.

“I thought we established and built the culture for this program this year. The Players should be credited with that. You’re judged on wins and losses and that’s the bottom line, we didn’t win enough games. I said it earlier in the season, that there’s enough moral victories, we got to get the real victories.” “It was a hard match both ways,” said Mizell. “The one-goal match has been the story of our season. I thought we fought hard and I feel for our seniors.”

One Clemson senior, Tommy Drake who assisted on the Clemson goal commented on the match. “We did the best that we could, and we played hard,” said Drake. “I think this team worked hard this season, and has built a solid foundation for the future of this program. I think they have a lot of things to look forward to in the future.”

Maryland scored early in the first half. In the ninth minute of play, Paul Torres was in the box and laid the ball back to Billy Cortes. Cortes rifled a shot from 16-yards out just inside the right post to give the Terrapins the 1-0 advantage. It was Cortes’ fifth goal on the year.

Clemson scored in the 19th minute. Tommy Drake dribbled down the right flank. He crossed the ball inside the box, to Austin Savage who was making a run toward the right post. Savage ran on the ball and then tucked the ball just inside the right post for his fourth goal of the season.

Maryland threatened in the 31st minute as Matt Kassel sent a corner kick from the left in the middle of the box. Jason Herrick controlled the ball and laid it off to John Stertzer. Stertzer took a shot from close range but the attempt was saved by the Tigers’ goalkeeper Cody Mizell.

In the 41st minute, Maryland’s Sunny Jane dribbled in the box and took a diagonal shot from 12 yards that was saved by a diving Mizell to keep the game tied. Maryland scored early in the second half. In the 56th minute, Casey Townsend chipped the ball in deep in the box near the left post from the right side from 35 yards out. Casey Townsend headed the ball in the goal from four yards out for his eighth goal this year.

The Tigers threatened in the 67th minute. Stephen McGill headed the pass towards the goal, but it was saved by the Maryland goalkeeper Zac MacMath. With 20 minutes remaining in the match the Tigers’ Riley Sumpter doved at the crossing pass, but missed making the attempt as the Terrapins held on to the 2-1 advantage.

With 3:00 left to go in the match, Clemson’s Drake rifled a diagonal shot from 12 yards out from the right that hit the outside of the right post and the right netting barely missing and scoring the equalizer. With 1:30 left to go Nick Burton had a one-one one opportunity with the Maryland goalkeeper MacMath. However, Ethan White a Maryland defender recovered and knocked the ball away. Maryland had 12 shots compared to Clemson’s five. The Tigers had four corner kicks to Maryland’s 3. Clemson’s Mizell had two saves in goal, while MacMath had one.