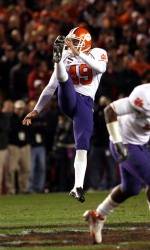 Clemson, SC – Clemson punter Jimmy Maners has been named to the watch list for the Ray Guy Award. Maners is one of 46 players from around the nation named to the list. He is one of five punters on the list from the ACC, as he joins Brent Bowden of Virginia Tech, Terence Brown of North Carolina, Kevin Jones of Duke, and Sam Swank of Wake Forest.

Maners is seventh in the nation in terms of career punting average among active Division I players with a 42.92 average for his career. That figure is also third best in Clemson history trailing only Chris Gardocki and Dale Hatcher, two former All-Americans who went on to be Pro Bowl punters in the NFL. So far this year, Maners has a 44.2 yards average on six punts with two inside the 20 and two of at least 50 yards.

The award will be presented at the Home Depot College Football Awards Show in Orlando, FL on December 11.