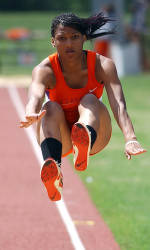 Blacksburg, VA – Patricia Mamona strengthened her case to earn an at-large bid to the NCAA Indoor Championships on Saturday after finishing second place in the triple jump at the Virginia Tech Last Chance meet.

Mamona hit a mark of 43’7″, which ranks second in school history, and is just two centimeters shy of an automatic NCAA qualifying mark. Her strong provisional effort should help earn the sophomore from Lisbon, Portugal a bid to compete in next week’s indoor nationals in Fayetteville, AR. In fact, heading into this weekend, only 10 student-athletes in Division I had a better mark than the one recorded Saturday by Mamona. Last year, 15 student-athletes competed in the women’s triple jump at the NCAA Indoor Championships.

Polly Hardy and Krystal Barringer competed in the 60m hurdles Saturday. Hardy, a senior from Anderson, SC, matched her season-best time (8.40) and placed fifth in the finals. Barringer (8.45) set a personal best in the event Saturday and finished ninth. Both rank in the top three in Clemson history in the 60m hurdles.

Anastasia Wilson performed well in the high jump Saturday. The sophomore from Myrtle Beach, SC cleared a personal best 5’8.5″ to also earn a runner-up finish. She cleared the fourth-best height in school history on her third and final attempt. Wilson’s previous best had been 5’7″ earlier this season in Gainesville, FL.

Caroline Kennedy finished seventh in the pole vault, but improved on her personal best in the event. She had a clearance of 12’6″ on her first attempt at the height. She had three attempts to become the first women’s vaulter in school history to surpass the 13’0″ mark, but came up short as she settled for seventh place. She ranks third in Clemson history on the indoor pole vault performance list.