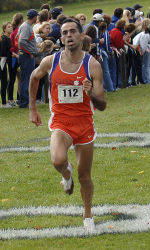 Terre Haute, IN – Clemson senior Itay Magidi concluded his cross country career with a 45th-place finish at the NCAA Championships on Monday. The senior from Yavne, Israel recorded a time of 31:52.8 at the 10K course in what was an outstanding individual season. He was the 2006 ACC Champion and was an All-Region selection as well.

Colorado won the team race and was followed in the top five by Wisconsin, Iona, Stanford, and Oregon. William & Mary, who competes in the Southeast Region just like Clemson, finished eighth as a team.

Magidi’s 45th-place showing came on a cold, muddy afternoon at the Wabash Valley Sports Center. It had rained in the area for the past three days prior to the national championship. Magidi also competed at the NCAA Championships in 2004, where he finished 58th overall. Thus, he improved 13 positions on his career-best effort at the national meet.

The Tigers now turn their attention to indoor track & field, where the season is set to get underway December 1-2 at home with the Clemson Opener.