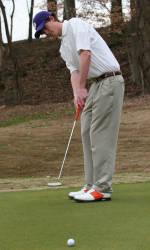 Clemson, SC — Clemson sophomore golfer Luke Hopkins won the South Carolina Amateur by seven shots on Sunday with a 72-hole score of 276. The native of Greer, SC had a final round 71 to complete his week with a 12-under par score. The event was held on the par 72 Country Club of South Carolina course in Florence, SC.

Hopkins had rounds of 70-65-70-71 for his 276 score, seven shots better than Brent Roof of Columbia, SC. Hopkins had a five-shot lead entering the final round and started Sunday’s round with five straight pars. He then birdied the par five sixth hole and finished the front nine at two-under par for the day, eight shots ahead of his nearest competitor on the leader board.

Hopkins had a birdie on the 10th hole to go to three under for the day, then had his only bad hole of the day on the par four 15th when he double bogeyed. He then made pars on the last three holes to take the seven-shot victory.

While Hopkins was the big story from a Clemson standpoint, two other Tigers finished in the top 10. Zack Siefert, a senior at Clemson this coming year, had a strong, consistent tournament and finished tied for fifth with a 286 score, two-under par. Siefert had scores of 71-72-71-72 in his best finish in an amateur event this year. The native of Simpsonville was one of just three golfers in the original 137 player field to shoot par or better in all four rounds.

Ben Martin, who was a first-team All-ACC golfer as a red-shirt freshman for the Tigers this year, had a 68 on Sunday ,the top round of the day, to finish with a one under par 287 total, good enough for ninth place. Phillip Mollica of Anderson, SC and a junior on the Clemson team this coming year, was 25th with a 295 score.