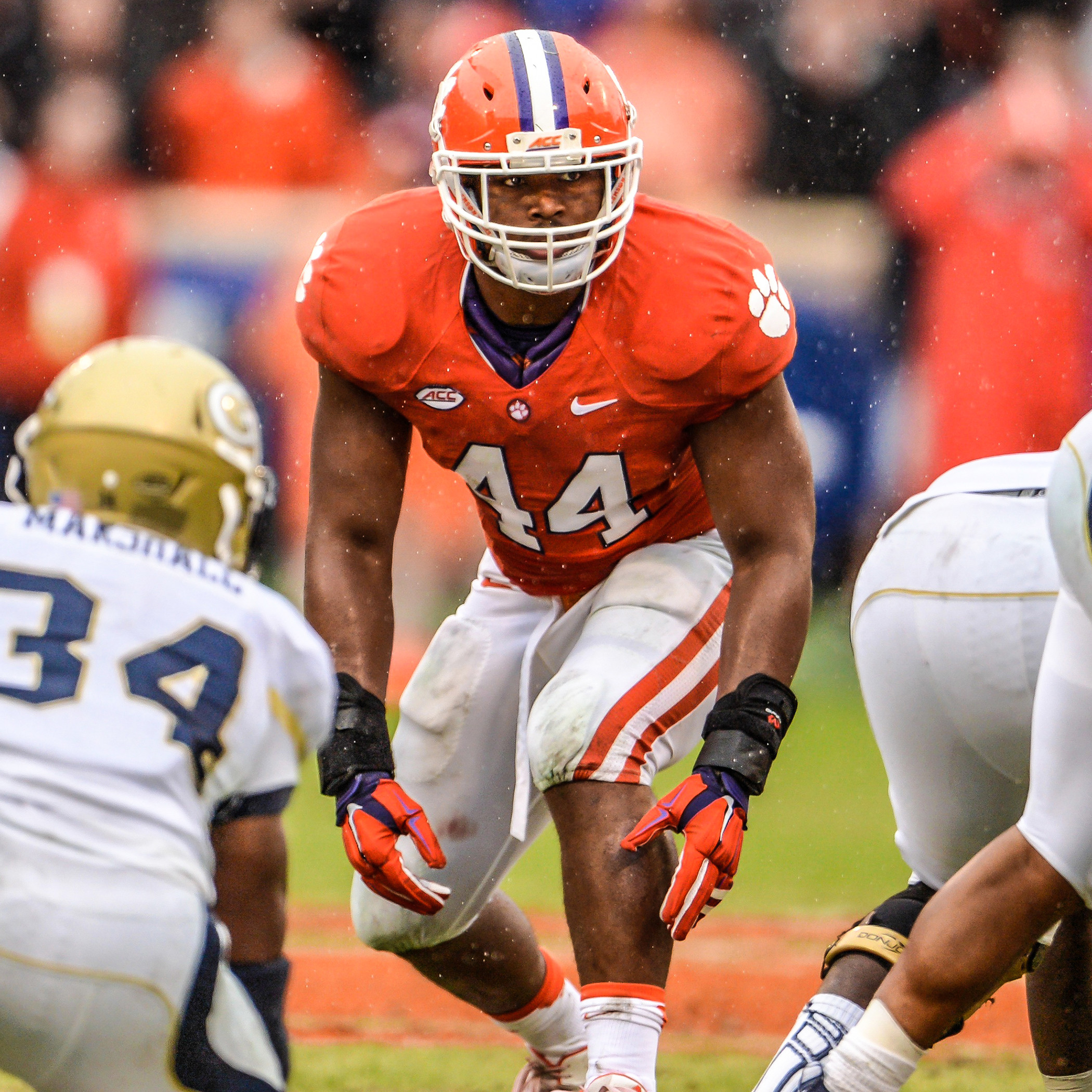 There are three words that best summarize how B.J. Goodson defines his experience as a Clemson Tiger…loyalty, adversity and faith.

His focus remained unfazed as he discussed his accomplishments. His greatest accolade on the gridiron came two weeks ago when he was named ACC Linebacker-of-the-Week for his performance against No. 6 Notre Dame. He had two takeaways, an interception and a recovered fumble, in the fourth quarter of Clemson’s 24-22 win.

Goodson became the first Tiger to record two takeaways in the fourth quarter of a game Clemson won by seven points or less since 1979, when all-time great Terry Kinard had two fourth quarter interceptions in the Tigers’ 16-10 victory at Notre Dame.

There is noticeable seriousness in his voice, and for him, what seems to matter most are just a few things. His value of loyalty is evident first in how he became a Tiger.

The Lamar, S.C., native said Clemson was the only school he ever considered after he was offered a scholarship during his sophomore year of high school.

“I actually had a bunch of visits I could have taken, but I’m really just a neighborhood guy who likes to stay in my place,” explained Goodson. “I visited here because Clemson was the first to offer me, and I looked away from those other schools. I loved the environment here. I felt like coming here was the right thing to do.”

The loyalty aspect is also apparent in how he discussed his teammates. Some of his favorite moments occurred when he could celebrate with them in the locker room.

“It’s something that I will always remember,” explained Goodson. “It’s something that once it’s gone, you’ll never be able to get it back..being able to enjoy those times with your teammates. It’s basically all of your loved ones because we put in so much hard work together. It’s a great thing that we’ll always be grateful for.”

One of the things he will miss the most is the shared time with his teammates, and that extends beyond the field and the locker room.

“Traveling before the games, over at school, in Vickery Hall and just seeing your teammates are all great because you all have that same thing in common. You all share a similar time in this and what you do and your schoolwork, so you have a lot in common.”

Another important element that seems to have shaped Goodson is adversity. It is a word that peppers his comments on his time as a Tiger. When asked about what advice he would give to his younger self coming to Clemson, he was adamant.

Part of his approach to adversity also lies in his preparation and the ways in which he conditions himself for a grueling season. Given the success and prominence of the team in recent years, one would expect that a player’s fondest memories would probably concern the accolades or spoils of victory. For Goodson, it is the part of the season that we do not see.

“Another thing I really appreciate is the hard times we have over the summer that aren’t in the spotlight. It’s those moments that I really cherish the most. That’s when you see who the leaders are, the heart of the team.”

Given the early string of wins for the team, it would be understandable for a player like Goodson, who has been such a big part of it, to want to get caught up in the success. Instead, like the coaching staff preaches, Goodson asserts his focus on what is ahead of him. He compares his approach to the season to that of a bricklayer, laying one brick at a time. He attributes his mindset, again, to his preparation before the season.

“It’s one of those deals from the summer,” said #44. “Just put your head down and work. That was one thing that I had in mind coming into last week and coming into this week. Taking it a week at a time, a game at a time and a play at a time. I don’t try to think any further.”

Often times when it comes to adversity, it is not something that a player can handle on his own. Everyone has different ways of coping with what challenges them, and for Goodson, a big part of that is his faith and those who support him.

“A lot of the time when people face adversity, that last thing on their mind is to ask for help from the Lord. That was one of the things that helped me out. My mother was a big part of that. She helped me out a lot by giving me encouragement. She’s big on the ‘word’.”

He has also found a lot of his encouragement from the coaches.

“The coaches, (James) Trapp, Jeff Davis, they were a very big inspiration to me. Coach Joey Batson was very big in helping me become mentally strong. They challenged me in my faith, and I appreciate that.”

His favorite passage is Psalm 23, and it has a prominent display on his dresser at home. When he is feeling challenged, he is also often encouraged by his mother to read Psalm 70.

Goodson attributes his faith as the reason for where he is today. Even after getting home in the early morning following the Notre Dame game, he was still in church on Sunday morning.

The rest of the season looks bright for the Tigers, and Goodson factors in to a large part of that. His hope is to be remembered as a gritty, in-the-trenches player who may not make all the plays, but creates opportunities for his teammates.

But no matter what happens, be it victory or defeat, he asserts that he is happy regardless because of his faith. He gives all of his glory to the Lord.