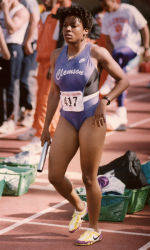 Kim Graham was six when she joined the family business. Well, it wasn’t actually a business, not in those days; more like an avocation. The hobby was running from one place to another place real fast and Kim Graham did this about as well as any woman in ACC history.

Herman Graham was a sprinter and football player at Virginia State. His wife Loretta was a sprinter in high school. All four of their children were sprinters. Jay Graham, the youngest and only son, was an All-America running back at Tennessee and played four seasons in the NFL. In 1977, Herman Graham, Frank Davis, Jr., and Rodney Bullock founded the Durham Striders, one of the nation’s top youth track and field organizations. Herman’s daughter Kim began running for the Striders that year.

She liked it and was good at it from the beginning. Graham was running 62 seconds for 400 meters within a year. She also raced at 100 and 200 meters. Graham gave field events like the long jump a try but preferred the visceral thrill of having the competition right beside her.

In 1981, the family moved to Manassas, Virginia, after mom Loretta was transferred with her job at IBM. Kim went to Stonewall Jackson High School, where she won numerous state sprint titles, three as a senior. She finished second in the 100 meters at the U.S. Junior Championships in 1989, third in the 200 meters. The top track and field powers beckoned.

Clemson was just moving into that category. In the early to middle 1980s, the Tigers boasted a handful of top long distance runners, athletes who ran cross country in the fall and track in the spring. But they didn’t begin to take women’s track and field seriously until 1987, when head coach Wayne Coffman was able to hire assistant coach Ron Garner away from small-college power Christopher Newport. Coffman and Garner were able to recruit and nurture top sprinters like Lisa Dillard. So the Tigers were on the radar screen in 1989 when Graham was looking at colleges…

Click on the link to read the full story