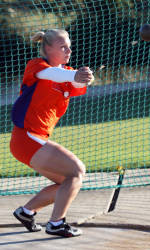 Clemson, SC – Nikola Lomnicka recorded a personal best and Alex Padgett matched his previous best, both in the hammer throw, to lead Clemson track & field on day one at the Orange & Purple Classic. Both student-athletes took home first-place finishes for the Tiger program, and both did so with NCAA regional-qualifying performances.

Lomnicka, a freshman from Slovakia, had a dominating performance to kick off the hammer throw competitions. She shattered her personal best, as she produced a throw of 208’8″ on the third attempt of the preliminaries. Her next closest competitor was Alexis DeJean of St. Joseph’s (IN), with a throw of 164’7″. Lomnicka holds the freshman record at Clemson for the hammer throw, and ranks second in school history in the event behind only former national champion Jamine Moton.

Padgett, from Rock Hill, SC, produced his first-place finish by matching his personal best to the centimeter. On his first throw of the preliminary round, he hit a mark of 192’7″. He eased his way to victory at that point, as the next-closest finisher was a Gardner-Webb thrower at 176’4″. Padgett ranks third in school history in the event.

In the women’s steeplechase, Stephanie Buffo saw a comfortable lead erased after Erin McAuley of Charlotte passed her with two laps to go. McAuley held the lead through the final water jump, but Buffo came back hard in the final 200 meters to take the victory. Buffo posted a time of 11:31.93 in the winning effort. Lauren Klas of Clemson placed third (11:48.88), while Maggie Bernard (12:39.93) was seventh.

Clemson had three entries in the men’s long jump Friday. George Fields was runner-up with a leap of 23’7.25″. Josh Fowler was second at 23’4″, while multi-event athlete Miller Moss placed fourth (22’7″).

The action concludes Saturday at the Rock Norman Track facility. The action gets underway with the women’s javelin at 10:00 AM. Children from local elementary schools will also be participating in special 8×75 yard mixed relays, beginning with third graders at 10 AM.