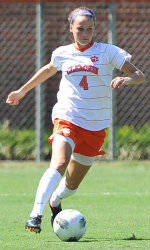 GREENSBORO, NC – Clemson freshman Liska Dobberstein was named to the 2011 ACC All-Freshmen Women’s Soccer Team as announced by the league office on Thursday morning. The midfielder from Charlotte, NC was one of 12 freshmen recognized by the conference for her performance in 2011. Dobberstein ranked second on the Clemson team in scoring, netting six goals and tallying five assists for 17 points. She started 15 games and played in all 18 for the Tigers on the year.

In her first career collegiate game, Dobberstein recorded a goal and two assists in Clemson’s win over South Carolina State on August 19. She then scored the game-winner for the Tigers in their 1-0 victory on the road at Appalachian State on September 2. In conference play, Dobberstein netted goals against Florida State and Maryland at home at Historic Riggs Field, and added an assist in Clemson’s double-overtime game against Miami in Coral Gables.