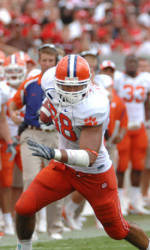 Clemson, SC — Clemson sophomore tight end Brian Linthicum has decided to transfer to another school. Clemson Head Coach Tommy Bowden made the announcement at his weekly press conference on Tuesday. Linthicum had three touchdown receptions last year when he played in 13 games, five as a starter. He had 11 total receptions for 76 yards. He played five snaps in the opening game of the year against Alabama.

“Brian is a fine player, and an outstanding student. We wish him the best in his future endeavors,” said Bowden.