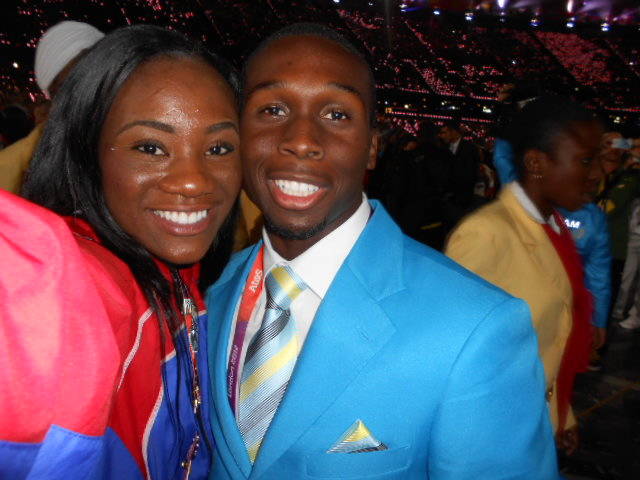 Editor’s Note: Clemson junior Marlena Wesh has been gracious enough to author a blog on her experiences from the Olympic Games in London, England.  Wesh, who will compete for Haiti, is scheduled for the qualifying heats of the 400 meters on Friday, August 3.  This is her third blog entry.

Friday night was so exhausting. The opening ceremony was good, but SO tiring. My country had to meet at the village by 9:00 to begin the athletes march. Luckily the stadium is within walking distance, but the only problem is that a two-mile walking distance that took 30 minutes eventually accumulated to an hour because of the stops and waiting for other countries to get in order.

It was a nice walk at first, because it was so exciting to walk out of the village and see the track stadium lit up. Along the walk were screaming fans chanting your country’s name and asking for autographs. I don’t think I have ever signed so many autographs in my life and taken so many pictures.

After the hour walk we finally are about to get into the stadium, we wave to our directors as they give us our last minute instructions on what we will be doing. As we get closer and closer to the stadium the excitement begins to overpower itself. They called Guyana, and we knew we were next. We proceed to hold hands and walk out to the stadium.

Being that there are only five athletes in my country, it was a very emotional experience for all of us, especially the fact that we have succumbed to much tragedy in the past with the earthquake killing hundreds of thousands. To be there in that moment, together, was just an unreal feeling. It was great, we received so much love from people that I didn’t even know new about us.

The ceremony was beautiful, I really enjoyed the music. When we were done walking they made us gather in the middle while the rest of the countries came out. I luckily found the Bahamas and got to experience the whole thing with a great person and friend, our very own Warren Fraser.

Sadly, I hate and am afraid of fireworks so that part wasn’t too good for me. But on a brighter note, watching them light the torch and the helicopter that dropped the confetti was definitely remarkable. The ceremony lasted until 1 AM here, which is why I was so exhausted. That sure was a lot of walking.

We received so much love that night, especially a very surprising shout out from NFL star Pierre Garcon from the Indianapolis Colts, expressing how proud he was of each of us. Knowing that everyone is already proud despite what happens in the next few days is what breaks me down. A medal will never add up to how much this means to everyone, especially the people back in Haiti. I know what we are doing is slowly rebuilding our nation and bringing it back to life.