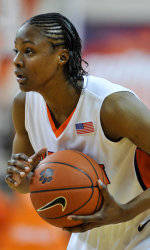 Former Clemson guard/forward Lele Hardy has been invited to the WNBA’s Washington Mystics’ training camp, which starts April 26. The Tiger standout finished up her outstanding career this past season, earning Second Team All-ACC honors and All-Defensive team honors after finishing third in the nation at 3.6 steals per game. Despite her 5-11 stature, she also ranked third in the ACC in rebounding.

Hardy ended her career ranked fifth in Clemson history in scoring, third in rebounding, and the school record-holder in steals. She averaged 14.5 points, 7.9 rebounds and 3.6 steals per game in 2009-10. Her mark of 398 steals ranks 21st in NCAA Division-I history.

In addition to her strong inside game, Hardy developed a reliable three-point shot, finishing her career seventh on the all-time makes list. She will become the first Lady Tiger to work out for a WNBA team since Lakeia Stokes in 2004.