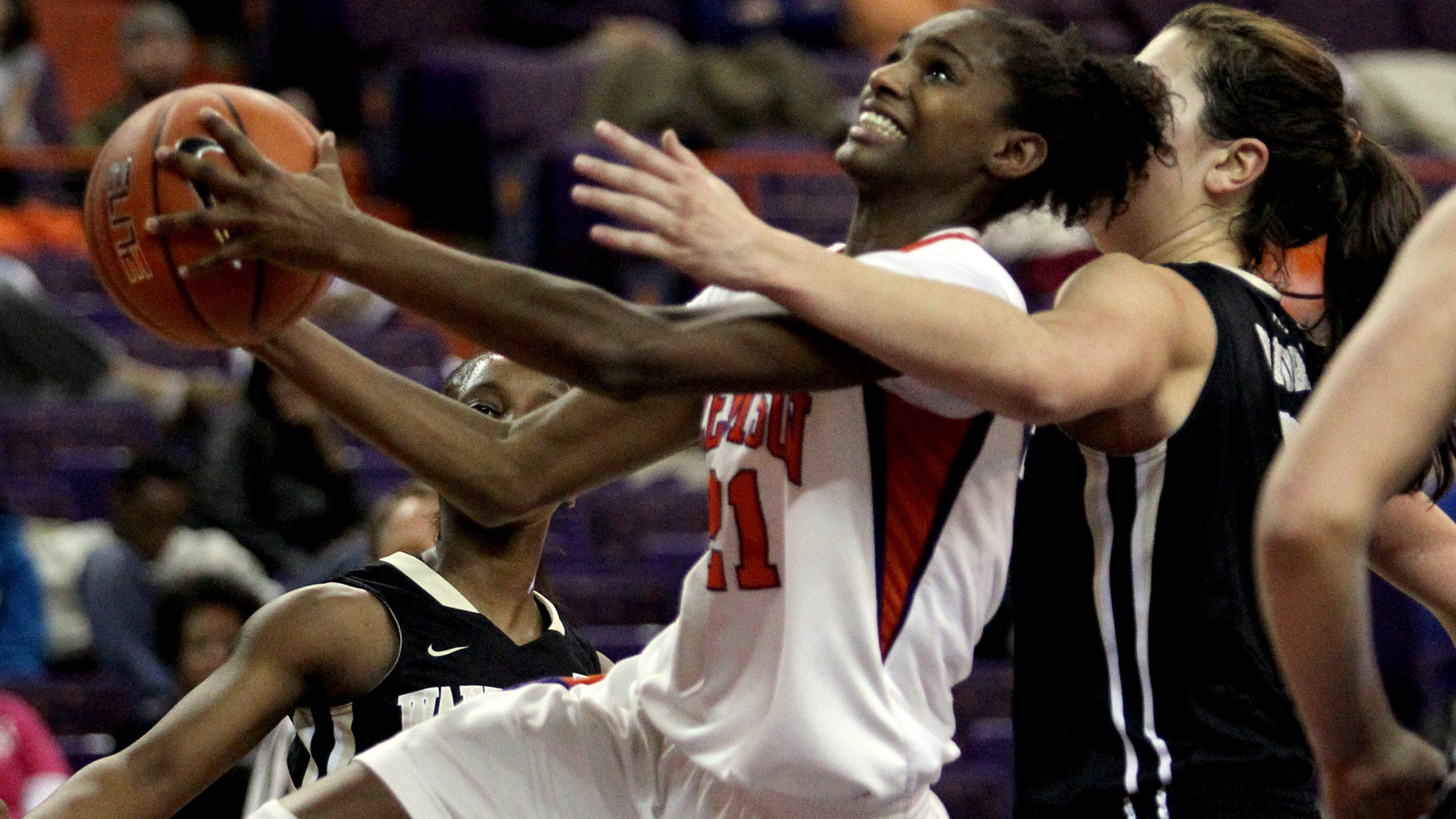 SYRACUSE, NY – The Clemson women’s basketball team fell victim to an 18-0 Syracuse run late in the second half that propelled the Orange (14-5, 3-3 ACC) past the Tigers (9-11, 1-5 ACC), 84-75, on Thursday in the Carrier Dome. The Tigers started hot, hitting 18-27 (.667) from the floor in the first half in building a 12-point lead, but couldn’t hold on down the stretch, as the Orange forced 22 Clemson turnovers.  Clemson’s 4-4 mark from behind the arc to open the game led it to a 37-25 lead in the first half. However, the Orange steadily climbed back as the Tigers clung to a 45-42 lead at the break. The .667 mark was tied for the ninth-best shooting half in school history, and junior Nikki Dixon was the catalyst.  Dixon led all scorers with 21 points and also added nine rebounds and a career-high eight assists, leaving her just shy of a triple-double. Dixon’s hot streak has seen her score 19 or more points in seven of the last eight games, and she also took two charges for the third straight game.  As efficient as the Tigers were in the first half, it was several costly mistakes that sealed Clemson’s fate in the second half. With a 64-58 lead at the under-eight media timeout, the Tiger offense went silent, going 11 straight possessions without a score during a four-minute span. When the dust settled, the Orange had managed 18 points during the run, taking a commanding, 79-67 lead with less than four minutes to play. Clemson would close to within five with 46.7 seconds to play, but the Orange went 4-4 from the line to seal the victory.  The Tigers struggled to contain forward Taylor Ford, who came into the game averaging just over five points a game and finished with 19 off the bench. Ford, Brianna Butler, and Brittney Sykes accounted for 53 of Syracuse’s 84 points. Syracuse also won the turnover battle, as they only had nine while Clemson had 22 turnovers that led to 13 Syracuse points. The Orange also exploited their size advantage, grabbing 23 offensive rebounds, and converting thme for 25 points.  The Tigers actually won the points in the paint, 40-34, but were outscored 20-8 from the free throw line.  Clemson got a nice boost from Nyilah Jamison-Myers who was 6-7 from the field and scored 14 points in 19 minutes of play. Senior Quinyotta Pettaway chipped in with 13 points on 6-9 shooting, and also pulled down the 600th rebound of her career, just the 12th player in school history to do so.  The Tigers return to action on Sunday at 2 p.m. against Miami in Littlejohn Coliseum for Youth Day, which will offer free admission to all fans 12 and younger.  Player of the Game: Nikki Dixon – The junior wing had 21 points, nine renounds, eight assists, two blocks, and two charges Stat of the Game: 23 – The Orange had 23 offensive rebounds leading to 25 second chance points in the game Game Notes:

Head Coach Audra Smith Quotes: “We played hard, and we had an opportunity to win this ballgame, but let it slip away. Hopefully we can get this behind us and get ready to take on a tough Miami team on Sunday. When you put 75 on the board on the road, you’ve got to leave the gym with a victory.”  “This team has to understand they have to do the things we tell them to in our scouting reports. We were up six, and then we just became uncharacteristic, had a brain lapse, and turned it over. Their pressure wasn’t too intense. They have to learn to stay with the game plan and do what we ask them to do.”  “Offensive rebounds killed us. I’m trying to be as patient as I can, but it’s hard. They are trying. For us, we just don’t have the matchups sometimes. We knew their big two were going to get theirs, but we had to shut the rest of them down, and Ford [averaging 5.1 ppg] had 19 points, and that can’t happen.”  “We turned the ball over too many times, we’re just trying to grow as we can. Jamison Myers played well for us, and Yotta came back strong. Dixon is staying steady at 21. I’m proud of Jordan going in there and making a couple of threes for us as well.”