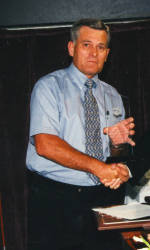 Clemson, SC — Larry Nash, the official scorer for Clemson men’s basketball and football games, and a track official for 40 years, died Saturday, February 16 at the age of 68. Nash had a long battle with brain cancer.

Nash first served Clemson as an official scorer for men’s basketball games in 1966 when the Tigers played home games in Fike Fieldhouse. His first year was the 1966-67 season when Bobby Roberts led the Tigers to a 9-5 ACC record and a 17-8 overall record. Nash worked the last two seasons in Fike Fieldhouse, then the first 38 seasons in Littlejohn Coliseum. He missed less than five home games over his 38 years working in Littlejohn Coliseum during.

“Larry Nash was as reliable and accurate a statistician and official scorer as we have seen in the Atlantic Coast Conference, ” said Clemson Sports Information Director Tim Bourret. “If he missed a game it was because he was very ill or had a family commitment. But he didn’t miss many games. He and Jim Phillips might have missed one game apiece over the first 35 years of Littlejohn Coliseum (which opened in 1968).

“Larry was very accurate, went by the book, and took charge of a game situation when he needed to. He had the respect of all the game officials, when they came to Littlejohn Coliseum.”

Nash also became the official scorer for Clemson football games in the 1970s and held that position until 2005 when he became ill with cancer. He was also a long time official at all Clemson men’s and women’s track events. He worked track meets all over the Southeast, including ACC and other conference championships.

Nash was also a volunteer for high school athletics at Pendleton High School for many years. He was a Lieutenant Colonel with District 3 South Carolina State Constables Association and also served in the Army National Guard. Nash was retired from Kearns Business Solutions in Easley. He was an avid model airplane enthusiast and flew in competitions throughout the Southeast.

Larry is survived by his wife, Emily and his son, Chris, who has also been a member of the Clemson statistics crew at Clemson for over 20 years.

Nash is the second longtime Clemson statistician to pass away in the last seven weeks. In late December, Dr. Harold Vigodsky, who served for over 30 years in various capacities at home football and basketball games, died suddenly of a virus at the age of 62.