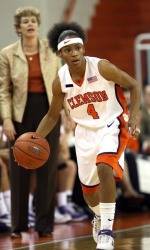 Lady Tigers To Travel To Wake Forest For Televised Contest

CLEMSON, SC – The Clemson women’s basketball team (7-10, 0-2 ACC) will travel to Winson-Salem, NC on Monday for date with the Demon Deacons of Wake Forest (12-5, 0-3 ACC). The game is scheduled to begin at 7:00 pm from the Lawrence Joel Memorial Coliseum and will be televised on the ACC’s regional network package.

The game will be aired on Fox Sports Net South, Fox Sports Net Florida, Comcast Sports and the New England Sports Network with Mike Hogewood calling the play-by-play and Debbie Antonelli providing commentary. Fans can also follow the action on the airwaves with Dan Scott and Kanetra Queen on WCCP-FM (104.9) in the Upstate or on the radio network’s website. Livestats will also be available by accessing www.clemsontigers.com.

Christy Brown notched her career high in points last season at Wake Forest with 18 and turned in 11 with nine assists in the match-up at at Littlejohn later in the year. The sophomore from Atlanta, GA is currently averaging 8.0 points per game this season and leads the team with 67 assists.

Scouting The Demon Deacons Wake Forest enters Monday’s contest with a 12-5 overall record but will be trying for its first ACC win of the season. The Deacs have fallen to Maryland, Virginia and Georgia Tech in conference action, most recently suffering a 57-47 loss in Atlanta.

Corinne Groves leads the squad with an 11.9 scoring average, while Alex Tchangoue is posting 11.6 points and a team-best 7.6 rebounds per game. Tchangoue has combined with Christen Brown and Camille Collier to drain 64 three-point field goals this season. The rest of the team has made just 10.

Although the Deacs are averaging just 58.1 points per game, they are holding their opponents to a meager 51.1 scoring average. The opposition is shooting just 33.4-percent from the field with a .318 percentage from long range. Wake Forest is also winning the battle on the boards by more than five per game.

Clemson vs. Wake Forest, The Series The Lady Tigers hold a 43-12 all-time advantage over the Demon Deacons in a series that dates back to the 1977-78 season. Clemson won both match ups last year, including a 73-57 decision in Winston-Salem, NC to improve to 20-7 in games played on Wake Forest’s home court.