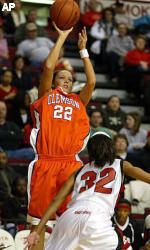 Lady Tigers To Play Host To #1/2 Duke On Thursday

CLEMSON, SC – The Clemson women’s basketball team will welcome top-ranked and undefeated Duke to Littlejohn Coliseum on Thursday evening. The Lady Tigers (8-11, 2-3) and Blue Devils (19-0, 6-0) will tip off at 7:00 PM in a game that will be broadcast on Yahoo! radio and by WCCP-FM (104.9). Fans can follow action from the start on Yahoo! with Dan Scott and Kanetra Queen and by accessing livestats at www.clemsontigers.com. They may tune in to WCCP at 8:00 PM.

Clemson has two players averaging in double figures and two more that score at least nine points per game. Maxienne White leads the Lady Tigers with a 10.5 scoring average and a 6.7 rebound per game mark. Julie Talley is averaging 10.1 points per game, while making 40.9% of her three-point field goal attempts. Tasha Phillips ranks third on the team with a 9.8 scoring average and is second with a 5.1 rebound per game mark, while Amanda Frist is averaging 9.5 points per game. White has scored at least 10 points in Clemson’s last four games, while Talley and Phillips have done so in two straight games. Point guard Tasha Taylor has handed out 116 assists so far this year, and her 6.11 assists per game ratio ranks second in the ACC and 13th in the nation.

Scouting the Blue Devils Duke is coming off of a 22-point victory over #1-ranked Tennessee on Monday night and took over the top ranking in the USA Today/ESPN poll on Jan. 24. The AP poll, released on Jan. 23, lists the Blue Devils at number two. Duke has now won 19 straight games, including six victories against ACC opponents, for an unblemished record.

Monique Currie leads the Duke squad with a 15.3 point per game average, while Alison Bales has a team-best 6.6 rebounds per game mark. Three other Blue Devils average in double figures to help Duke to a best-in-the-nation 90.8 points per game.

The Blue Devils also lead the country with a +37.5 scoring margin, a 23.4 assist per game average and a 53.1% field goal shooting percentage. Duke also averages 43.8 rebounds per game while allowing their opponents just 30.9 per game.

The Series Thursday’s game will be the 60th meeting in history between the Clemson Lady Tigers and the Duke Blue Devils. Clemson holds a 32-27 advantage in the series score, with a 16-9 record in matches played in Littlejohn Coliseum. However, Duke has been the victor in the last eight contests, including a 72-48 win last year in Durham, NC. The Lady Tigers’ last victory over the Blue Devils came during the 2000-01 season when they won a 93-75 decision at home.