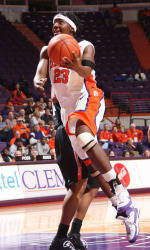 CLEMSON, SC – Senior D’Lesha Lloyd will play her final game at Littlejohn Coliseum on Thursday night as the Clemson women’s basketball team plays host to NC State. The contest is the last home game of the season for the Lady Tigers, who will conclude the 2007-08 regular season on Saturday. Clemson (10-17, 3-9 ACC) and the Wolfpack (17-10, 5-7 ACC) are slated for a 7:00 pm tip-off.

The game will be broadcast on ACC Select while fans can also follow the action on the airwaves with the Clemson Tiger Sports Network. Don Munson will call the play-by-play while www.clemsontigers.com.

Scouting the Wolfpack NC State enters Thursday’s match-up having won three of its last four games. The one loss to at second-ranked North Carolina on Monday night by just six points to drop the team to 17-10 overall and 5-7 in the conference.

The Wolfpack returned just two starters from its 2007 ACC runner-up and NCAA Tournament team and endured the usual growing pains of a young roster. However, Khadijah Whittington is having a monstrous senior campaign, leading the squad in both scoring and rebounding. Her 17.0 points per game rank fourth in the ACC, while her 11.1 rebounding figure leads the league and is a top-five mark nationally this season. The Roanoke, VA native also boasts team-bests with 70 steals and 41 blocked shots while shooting 511.3-percent from the field.

Veteran point guard Shayla Fields has guided the Pack offense to 65.8 points per game, totaling 13.1 per game herself and handing out 92 assists on the year

Clemson Players vs. NC State Just five players have seen action against the Wolfpack in their careers;

* Christy Brown – played just 16 minutes in 2006-07 contest due to an illness. * Morganne Campbell – had three points and two rebounds against NC State last season. * Moreemi Davis – played just 26 minutes in two games against the Wolfpack as a freshman; had 10 rebounds with five points in 2006-07 meeting. * Lele Hardy – had a double-double with 13 points and 10 rebounds last season; was 9-for-11 from the foul line in the game. * D’Lesha Lloyd – averaging 10.3 points and 4.8 rebounds in four career games against the Wolfpack.

McKinney To Face Former Coach Clemson Head Coach Cristy McKinney (formerly Earnhardt) was a four-year letterwinner at NC State from 1975-79. Her coach those years was Kay Yow, who is still guiding the Wolfpack women’s basketball team. McKinney’s freshman season was also Yow’s first year at the helm of the NC State program. She is now in her 33rd season in Raleigh.

Thursday’s game will be the fourth meeting between McKinney and Yow with the teacher holding a 3-0 edge over the student. Yow and the Wolfpack defeated the Lady Tigers, 65-62, in Raleigh, NC in their 2006-07 match-up.