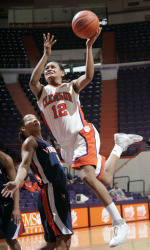 CLEMSON, SC – The Lady Tigers will play host to Winthrop on Tuesday night in the first game of a Clemson basketball double-header with the men’s team. The women’s game is scheduled for a 5:30 p.m. tipoff at Littlejohn Coliseum.

Broadcast Notes * The game will be aired on the Clemson Tiger Sports Network * Don Munson will call the play-by-play with Kanetra Queen providing color commentary * The game will be video streamed on the Internet at ACCSelect.com * Livestats will be available on www.clemsontigers.com

Clemson Quick Notes * The last time Clemson and Winthrop met, the Lady Tigers won, 52-51, with a buzzer-beater by Susan Yenser * Tasha Taylor was the team’s leading scorer in the last meeting with Winthrop and also had six steals in the game * Lele Hardy ranks second in the ACC in scoring with a 20.3 average * Winthrop will be the fourth team from the state of South Carolina that the Lady Tigers have faced in 2008-09 * Lele Hardy 32 points against Georgia State on Nov. 22 were the most for a Lady Tiger in five years. * Taylor and Christy Brown both rank in the top six for career assists per game * Lele Hardy 199 career steals are seventh in school history * Hardy holds the school record with a 3.06 career steals per game average * Clemson has nine players from the state of Georgia on its roster, which is tops in the nation for a school in a different state, according to a survey by the SID at George Mason * The Lady Tigers were predicted to finish ninth in the preseason ACC poll * Clemson returns nine letterwinners and has six freshmen for the 2008-09 season * Sthefany Thomas spent her offseason traveling with the Argentinean national team to the South America Championships and the FIBA Olympic Qualifier * The 2008-09 Clemson women’s basketball roster has quite the athletic lineage. Six players have parents and/or siblings that also played a sport at the Division I level * McKinney and her staff signed North Carolina point guard Keyrra Gillespie on Nov. 12. Gillespie will join the Lady Tiger program for the 2009-10 season.

Series Notes * Clemson leads the series score, 13-1, over Winthrop in a series that dates back to 1976 * The Lady Eagles won that first game, but Clemson has won the last 13 match-ups, including the most recent during the 2005-06 season * The Lady Tigers are a perfect 10-0 all-time in home games against Winthrop