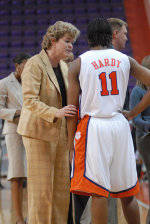 Lady Tigers To Face NC State At 7:00 PM On Thursday

CLEMSON, SC – Head Coach Cristy McKinney, a four-year letterwinner at NC State from 1975-79, will take her Lady Tigers to Raleigh, NC for a Thursday night match-up against the Wolfpack and her former coach Kay Yow. The Lady Tigers (10-13, 2-6 ACC) and NC State (17-7, 6-3 ACC) are scheduled to begin play at 7:00 pm from Reynolds Coliseum. Fans in the upstate can follow the action on the airwaves on WCCP-FM 104.9 with Dan Scott and www.clemsontigers.com It will also be broadcast live on the internet via ACC Select and can be viewed by selecting the link below.

D’Lesha Lloyd continues to lead the Clemson offense with a 14.7 scoring average while also boasting a team-high 6.9 rebounds per game. She has scored in double figures in 19 of the Lady Tigers’ 23 games, including 17 of the last 18. Junior classmate Tasha Taylor has led Clemson during the conference season, averaging 13.5 points per ACC game, while freshman Lele Hardy owns a league-best 3.22 steals per game figure which also ranks ninth in the nation.

Clemson vs. NC State, The Series Thursday night’s match-up will be the 72nd meeting in history between the Clemson and NC State women’s baskeball programs, dating back to 1976. The Wolfpack leads the series by a 44-27 margin and has won the last three meetings, including last year’s regular season contest and an opening-round match-up in the 2006 ACC Tournament. NC State also holds a 22-6 advantage in games played on its home court. The Lady Tigers’ most recent victory over the Wolfpack was a 78-65 decision in the 2004-05 season, and Clemson last defeated NC State in Raleigh during the 2001-02 season, winning 63-52.

Scouting the Wolfpack NC State has won its last four games after suffering back-to-back losses to Duke and North Carolina. The Wolfpack now boasts a 17-7 overall record with a 6-3 mark in ACC play.

Junior Khadijah Whittington leads the Wolfpack with a 10.2 rebounds per game average that also ranks 18th in the nation. She owns a 10.1 points per game figure that is second on the team behind Shayla Fields’ 10.3 average. Whittington also boasts a team-high 41 steals with 34 blocked shots.

Overall, NC State is averaging 65.3 points per game while holding their opponents to a .367 field goal shooting percentage. The Wolfpack is out-rebounding the opposition by a +4.7 (41.4-36.7) margin while also causing 2.2 more turnovers per game than committing.

Veterans Vs. NC State All six of Clemson’s returning letterwinners have seen action in multiple games against the Wolfpack due to an opening round match-up in the 2007 ACC Tournament. In regular season action, D’Lesha Lloyd leads the Lady Tigers with an 11.0 points per game average while also collecting 5.0 rebounds in three games.