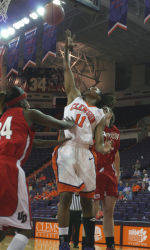 CLEMSON, SC – The Clemson women’s basketball team will look for its third straight victory as the team travels to Atlanta, GA on Monday night to take on Georgia Tech. The Lady Tigers (12-14, 4-7 ACC) and Yellow Jackets (16-10, 7-5 ACC) are scheduled to tip-off at 7:00 pm from the Alexander Memorial Coliseum. The game will be televised on the ACC’s regional network, which includes Comcast SportsNet, Fox Sports Net South, SunSports and the New England Sports Network, with Mike Hogewood calling the play-by-play and Charlene Curtis serving as an analyst. Fans will also be able to follow the action on the airwaves with Don Munson and Kanetra Queen on the Clemson Tiger Sports Network or via livestats at www.clemsontigers.com.

Rookie Lele Hardy, coming off of a 22-point, 10-rebound performance against Wake Forest, needs just two steals in Monday night’s game to tie the Clemson freshman record for steals in a single season. The Spartanburg, SC native has tallied 85 so far this year, while Ramona O’Neal totaled 87 during the 1979-80 season. Hardy also leads the Lady Tigers with a 6.9 rebounding average and ranks third on the team in scoring with an 11.3 figure.

Clemson vs. Georgia Tech, The Series Monday night’s contest will be the 57th meeting between the Lady Tigers and Yellow Jackets, with Clemson holding a 41-15 advantage in the series that dates back to 1980. The Lady Tigers also lead by a 16-9 margin in games played in Atlanta, GA, but Georgia Tech claimed last season’s match-up on its home court. The Yellow Jackets also defeated Clemson earlier this season at Littlejohn Coliseum, winning 63-57 on Jan. 7.

Stephanie Higgs leads the squad and ranks seventh in the league with a 15.3 scoring average. The guard is also averaging 4.0 rebounds per game and has totaled 58 assists and 43 steals on the year. Janie Mitchell owns a team-best 6.5 rebounding average while also posting 14.2 points per game. Chimoa Nnamaka also averages in double figures for Georgia Tech with a 12.7 figure.

Adrianne Bradshaw – has played 58 minutes in five games against the Yellow Jackets with seven rebounds.

Morganne Campbell – was 2-for-2 for four points in just eight minutes of action on Jan. 7.

Moreemi Davis – is averaging 4.7 points in three games against the Yellow Jackets …had four rebounds against Georgia Tech earlier this season.

Lele Hardy – led team with 19 points against the Yellow Jackets on Jan. 7 …also had six rebounds, three assists, a steal and a block in the contest.

D’Lesha Lloyd – scored 18 points earlier this season against Georgia Tech to bring her average to 11.4 points in five games against the Yellow Jackets …had a team-best eight rebounds in the contest and now owns 15 against them.

Tasha Taylor – has totaled 26 assists in five games against Georgia Tech …also averaging 6.8 points and 3.8 rebounds in those contests.

Carrie Whitehurst – played just four minutes in game earlier this season with one three-point field goal …has 23 total points in seven games against the Yellow Jackets with 12 rebounds.

Susan Yenser – has scored seven points and collected three rebounds in 45 minutes of action against Georgia Tech …had three assists in game earlier this season.