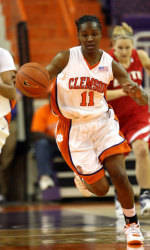 Lady Tigers Set For Date With Ohio On Saturday

CLEMSON, SC – The Clemson women’s basketball team will look to extend its winning streak to five straight on Saturday afternoon as the Lady Tigers play host to Ohio at Littlejohn Coliseum. The game is now scheduled for 4:00 p.m., a change from the originally released time of 7:00 p.m.

Clemson Quick Notes * Saturday will be the second straight game in which Clemson facing a first-year head coach and the fourth time this season * The Lady Tigers pulled out the overtime victory over Northwestern to win their ACC/Big Ten Challenge match-up * Clemson is now 2-1 in overtime games under Cristy McKinney and 19-15 all-time * Clemson won the Husky Classic over the Thanksgiving weekend, defeating Kent State and host-Washington * Lele Hardy was named the MVP of the Husky Classic while Whitney Hood was selected to the all-tournament team * The Lady Tigers committed just seven turnovers against Winthrop on Nov. 25, which was the second fewest all-time * Lele Hardy 32 points against Georgia State on Nov. 22 were the most for a Lady Tiger in five years. * Taylor and Christy Brown both rank in the top six for career assists per game * Lele Hardy 208 career steals are seventh in school history * Hardy holds the school record with a 3.01 career steals per game average * Clemson has nine players from the state of Georgia on its roster, which is tops in the nation for a school in a different state, according to a survey by the SID at George Mason * Sthefany Thomas spent her offseason traveling with the Argentinean national team to the South America Championships and the FIBA Olympic Qualifier * The 2008-09 Clemson women’s basketball roster has quite the athletic lineage. Six players have parents and/or siblings that also played a sport at the Division I level * McKinney and her staff signed North Carolina point guard Keyrra Gillespie on Nov. 12. Gillespie will join the Lady Tiger program for the 2009-10 season.