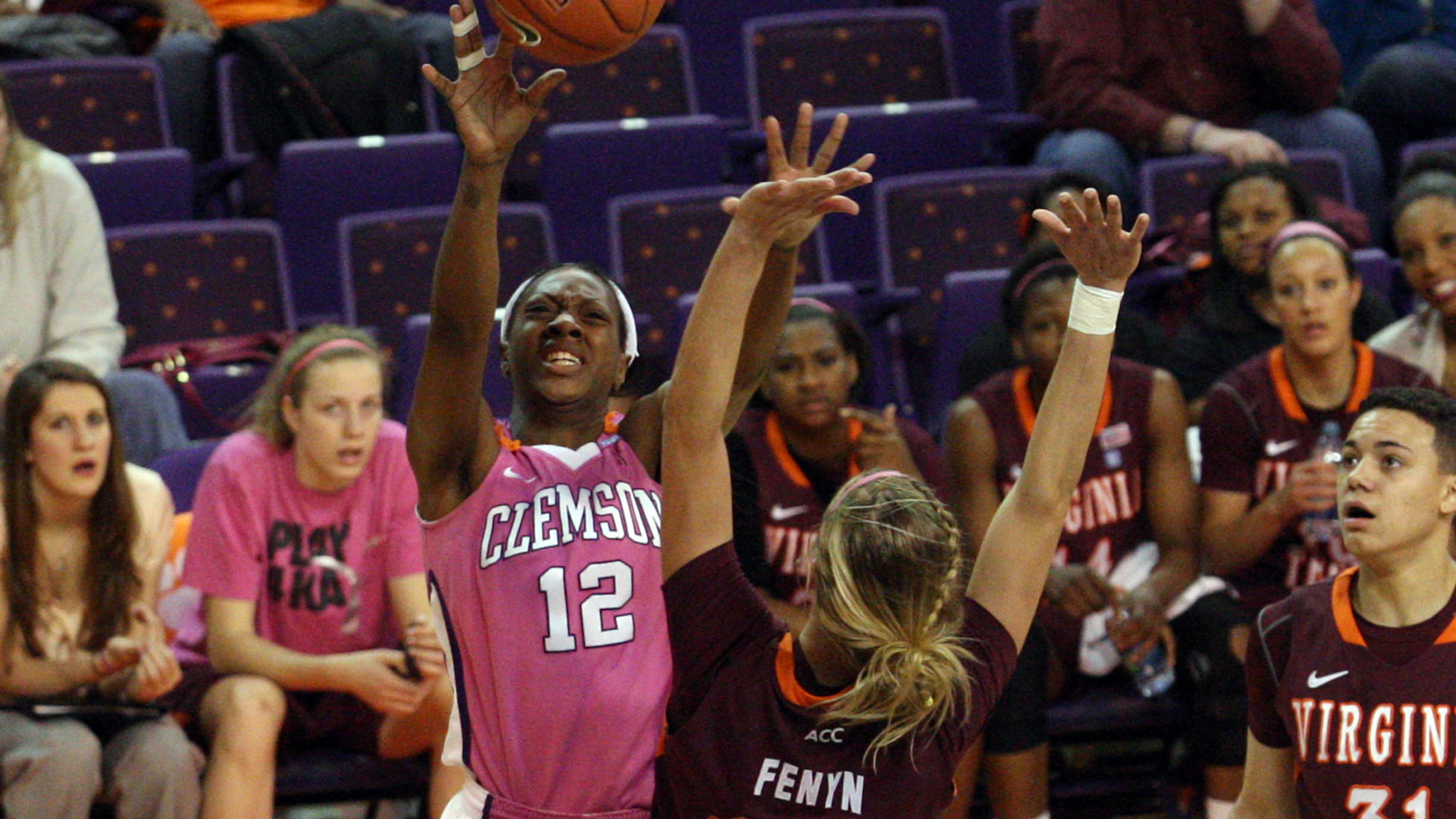 “We were able to claw back with incredible effort and intensity,” said Itoro Coleman, who improved to 3-2 against the Hokies in her career. “They wanted it today. When you focus on effort and bring it, and there’s no mistaking it on the court. It showed in the second half and helped us get the win today.”

Clemson wore pink as the Lady Tigers participated in the league-wide initiative to “Play4Kay,” a tribute to Kay Yow, the late NC State head coach. The initiative is designed to raise awareness for breast cancer research.

The Lady Tigers defeated the Hokies for the second time this season, and won their third in a row overall in the series to improve to 8-7 against the Hokies. They also evened their all-time mark at 4-4 against Virginia Tech at home.

“I’m very proud of the team today,” said Coleman. “We faced adversity at times but didn’t give up. We battled back and were able to grit out a win when it mattered.”

Ford, who finished with 15 points (3-8 FG, 9-10 FT), scored nine points during the deciding run, while Pettaway scored all 12 of her points in the second half to help Clemson take down the Hokies.

Ford’s 9-10 mark at the free throw line was the second best mark for a Clemson player this season and her 15 points were the second-best output of her career. She scored 16 points in a road win at Wake Forest earlier this season.

Clemson trailed, 25-17 at halftime as Monet Tellier nailed a three just before the halftime horn to set the margin. Tellier had a game-high 20 points, but did so on just 6-17 from the floor while playing all 40 minutes.

The Lady Tigers fell behind, 28-17, early in the second half after Lauren Evans nailed a jumper with 18:17 to play. Later, Clemson would chip the lead down to five on a layup from Charmaine Tay, but Tech answered in the form of a Tellier three and a Nia Evans jumper to take a 35-25 lead with 12:55 left, and halt Clemson’s momentum temporarily.

Clemson responded in a big way, however, holding the Hokie to just one field goal over the next ten minutes of game time, and went on a 16-2 run in which Ford scored nine points, Dixon added four, and Pettaway had three. When the dust settled, Clemson had a 41-37 lead with 7:01 left. Pettaway helped take over from there, scoring six points over the final few minutes to help ice the game. It was the 16th time this season she scored in double-figures for Clemson.

The Lady Tigers return to action in Littlejohn on Thursday as they play host to the Virginia Cavaliers.