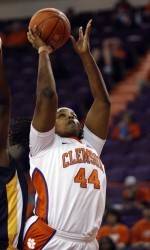 CLEMSON, SC – The Clemson Tigers opened up the Itoro Coleman era in style on Friday night with a 71-55 victory over UNC Greensboro in Littlejohn Coliseum.

The Tigers were led by Shaniqua Pauldo, who had 26 points and 15 rebounds–both career highs–in 35 minutes. She made 11 of her 22 shots from the floor, including her only three-point attempt, en route to her first career double-double. UNC Greensboro got 17 points from Amanda Leigh and 12 from Monique Lloyd to pace its attack.

Sthefany Thomas added 16 points and five assists for the Tigers, and Jasmine Tate contributed 11 points and eight rebounds. Kirstyn Wright filled up the stat sheet with seven rebounds, four assists, and four steals to go along with her two points.

“I thought our overall effort was very good for our first game without the head honcho in a new system,” Assistant Coach Karleen Thompson, who was the acting head coach in the game, said. “We really bought in and played hard. We have some things we need to continue to work on, but there is a lot to build on. I thought it was a good win.”

Although Coleman was not in attendance due to a leave of absence following the recent birth of her third child, she was pleased with her team’s effort in picking up her first career victory.

“I am really excited about our first win,” Head Coach Itoro Coleman said. “My staff has done a great job preparing the team in my absence. I thought our post play really set the tone for us early. Pauldo had a career high and the guards did a good job of getting her the ball. In the second half, Greensboro did a good job of turning up the pressure and they were getting a lot of deflections. We kept our composure down the stretch and were able to get the win. We are definitely not where we need to be, but I am proud of the fact that we competed.”

The contest went back-and-forth early, but the Tigers never trailed after taking an 18-17 lead on a Lindsey Mason jumper at the 11:04 mark of the first half. Beginning with that basket, the Tigers embarked on an 18-2 run that turned that one-point deficit into a 34-19 lead at the 3:52 mark. Lindsey Mason was the catalyst for the Clemson offense, as she scored six Clemson points during the run.

During that stretch, the Spartans missed eight straight field goals and turned the ball over six times. For the half, Clemson’s swarming half-court defense forced 14 turnovers, which turned into 13 points for the Tigers on the other end of the floor. In addition, Clemson’s offense was efficient as there were assists on 15 of 18 made baskets.

Clemson’s largest lead of the night was 19 points at 71-52 as the Tigers maintained the lead throughout the second half.

Defensively, the Tigers were solid, limiting the Spartans to just 20-of-64 (31.3 percent) shooting for the night. They forced 20 turnovers in the game and grabbed 16 offensive rebounds, which led to 16 second-chance points.

The Lady Tigers will be back in action at home against Charleston Southern on Sunday, November 14 at 2 p.m.