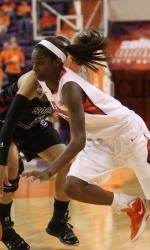 “I hate that we lost, but this is a good teaching moment for our team,” she said. “We definitely showed our youth today and will try to get better from it.

“We defended better in the second half and limited their second half opportunities. We just laid an egg. Everything that could have gone wrong did go wrong. We continued to fight and didn’t give up. That was good to see.”

Clemson evened the score with the Gamecocks 22-22 after the break, limiting them to 14 points in the paint after USC scored 30 in the opening 20 minutes.

“Once they started scoring initially in the lane, we did not respond back from that too well,” Coleman said. “Then we had to play pick up.”

Clemson trailed 43-26 at the break and though it competed well in the second half, the outcome of the game was basically decided when the Gamecocks cashed in on early opportunities around the basket.

“I thought South Carolina did a good job of sealing. When I say sealing, they sealed our help side,” Coleman said. “When you penetrate to the basket, there is another defender that is supposed to come over and give you help so they can’t go right to the basket. What they did was they sealed her and they were able to get to the basket.

“We could not even fix that. In the second half we did a better job of guarding that.”

The Lady Tigers also turned the ball over 22 times, 14 of which came off steals.

“Them getting to the basket and penetrating in the first half was a big concern to me,” Coleman said. “They had eight unanswered points and then we would come back and try to force our first shot and it just didn’t go down.

“We didn’t get into a flow on offense. We kept trying to play from behind and we just laid an egg in the first half.”

Clemson actually shot a higher field goal percentage than South Carolina. The Lady Tigers shot 40.4 percent from the field, while USC shot 39.7, including 27.6 percent in the second half.

It marked the first time since December 12, 2009, that Clemson has recorded a higher field goal percentage than its opponent and lost.

“We picked up our defensive intensity in the second half,” Coleman said. “Everybody picked it up in the second half. We still were not able to execute on offense the way we wanted to. We got good shots, but we were missing layups.

Quinyotta Pettaway scored 11 points for the Lady Tigers and had a career-high tying nine rebounds. She has now scored double-figure points in all three games this season and has already surpassed her point total from all of last season.

“Yotta has the potential. It has been a good surprise that she has been able to play this productive,” Coleman said. “It is good to see. Coach (Karleen) Thompson has been working with her and all the post players on commanding the ball and being a force on the inside.

“Yotta has gotten better every practice and every game. We definitely look for her to be consistent. She is definitely the first person off the bench and definitely part of the rotation.”

* Quinyotta Pettaway led the Lady Tigers with 11 points and a career-high tying 9 rebounds. She has now scored double-figure points in all three games this season and has already surpassed her point total from all of last season.

* Nikki Dixon added 14 points for the Lady Tigers. She has also scored double-figure points in all three games this season.

* Pettaway and Dixon are the only Clemson players to have double-figure points in every game this season.