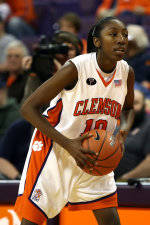 CLEMSON, SC – The Clemson women’s basketball team fell to 14th-ranked Virginia, 75-67, on Monday night at Littlejohn Coliseum as a late second-half run came up short. The Lady Tigers dropped to 12-9 on the year and 2-5 in conference play.

The Lady Tiger Wright was forced to the bench with a nosebleed shortly after her third straight basket and couldn’t regain the touch. She posted 13 points in the effort to match her season high.

Virginia’s Lyndra Littles hit a pair of foul shots as did Monica Wright, the ACC’s top scorer at more than 22 points a game, to put the Cavaliers back up by nine at the 8:24 mark.

Virginia’s Wright finished with 19 points while Littles led all scorers with 22. Aisha Mohammed had 17 points and 11 rebounds for the Cavaliers.

Virginia was whistled for just 10 fouls, compared to the 21 for the Lady Tigers, and went 22-of-27 from the line in the game. The Cavaliers made just three field goals in the final 11:49 of the game while knocking down 12 of their 18 points during the stretch on free throws.

With the Cavaliers ahead, 67-61, Lele Hardy took over the Clemson offense with the team’s final four field goals, but the Lady Tigers couldn’t cut it closer than six in the final minutes.

Although Clemson out-shot Virginia in the second half by more than 20 percentage points, the Cavaliers significantly won the battle on the boards, out-rebounding the Lady Tigers, 49-35.

“Virginia definitely has a good team,” said Clemson Head Coach Cristy McKinney. “I told the team before the game that the key is going to be getting boards. I thought at half our defense had done a good job, we just couldn’t get a board when we needed it.”

Virginia went on an 18-2 run midway through the first half that put the Cavaliers on top 24-12. Christy Brown knocked down a pair of free throws and Lindsey Mason hit a basket to cut the deficit back to single digits with 7:21 remaining.

However, Virginia responded and posted the next six points for a 14-point advantage, the widest of the half. Clemson then ended the half on a 10-6 for the 36-26 halftime score.

The game was the first for both teams since the death of former North Carolina State coach Kay Yow and tributes her great were everywhere at Littlejohn Coliseum. Clemson gave out pink cancer awareness ribbons to fans, along with a pink placard with the words, “In Loving Memory of Kay Yow.”

The Cavaliers and Lady Tigers each wore T-shirts during warmups with “Yow Forever,” and the pink ribbon symbol on the back. Clemson coach Cristy McKinney, a member of Yow’s first N.C. State team, wore her alma mater’s distinctive color while her Virginia counterpart, Debbie Ryan, had a pink sweater.

There was a halftime feature on Yow’s life and legacy shown on the Littlejohn Coliseum replay board and the officials used pink whistles in memory.

The Lady Tigers face a quick turnaround as they play host to Virginia Tech on Wednesday night at Littlejohn Coliseum. Clemson will battle the Hokies at 7:00 pm.