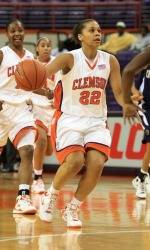 The 49ers led by a 50-33 margin at the 9:06 mark in the second half when Clemson put together an 11-0 run to narrow the gap to its fewest points since midway through the first period. Jasmine Tate grabbed a defensive board and Sthefany Thomas converted on the offensive end to spark the run. Following a basket by Whitney Hood, Thomas drained a three from the left wing with 6:44 left.

Tate then put the deficit under 10 points with a free throw and Bryelle Smith knocked down a three-pointer from the corner to make it 50-44.

The 49ers went back up by 10 with baskets by Shannon McCallum and Danielle Burgin. Tasha Taylor responded with a pair of free throws for the Lady Tigers and Lele Hardy made a layup on Clemson’s next possession to cut the Charlotte lead back to six. Thomas then hit her third three-pointer of the game to put the Lady Tigers within three at 54-51 at the 1:12 mark.

However, Clemson couldn’t hit another shot and the 49ers converted four free throws down the stretch to come away with the win. Charlotte improved to 9-4 on the year, while the Lady Tigers dropped to 9-4.

“The problem was that we couldn’t shoot the ball tonight,” said Clemson Head Coach Cristy McKinney. “The first few minutes of the game, we were missing all of our shots, and we quit running our offense after that. We didn’t take bad shots, we just shot badly.”

The Lady Tigers were 6-of-8 during their 18-4 run, but were just 19-of-59 from the field for the game for their least productive effort of the season. Thomas’ 11 points led the squad, while Taylor had eight for the night.

McCallum posted 21 to lead Charlotte while Erin Floyd turned in a double-double with 11 points and a game-high 13 rebounds. Burgin also pulled down 11 rebounds as the 49ers were dominant on the boards, grabbing 51 to Clemson’s 34.

“Charlotte was definitely more aggressive and our post players had trouble guarding them,” McKinney said.

The 49ers held a 30-19 advantage after a turnover plagued first half in which the teams combined for 27. They capitalized on the Lady Tigers’ poor shooting performance to quickly grab the lead. Charlotte converted 42.3 percent for the half while Clemson was just 7-28.

The Lady Tigers will open the conference season on Monday evening as they travel to Coral Gables, FL to take on the Hurricanes. The game is the first part of a double-header with the Miami men’s team and is slated for a 4:00 pm tip off.