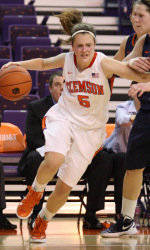 CLEMSON, SC – The Lady Tigers held Virginia to .286 shooting on Sunday, their second-best defensive effort of the season, but fell by a 54-47 score to the Cavaliers (13-4, 1-2 ACC) on Sunday in Littlejohn Coliseum. Freshman Kelly Gramlich led all players with 15 points, including three 3-pointers and Clemson (4-10, 0-3 ACC) held the Cavaliers without a field goal for the final 8:05 of game time.

It was the fourth straight game that Clemson held an opponent to below 60 points, and the first time the Lady Tigers held a team to sub-.300 shooting in a loss. Virginia took advantage from the charity stripe, hitting 15-21, including 5-6 in the final 1:10 to ice the game.

Virginia scored 26 points off 23 Clemson turnovers, and had 19 second chance points on 25 offensive rebounds, which turned to be enough as Clemson shot .391 from the floor, including a 14-30 mark inside the arc.

Gramlich’s 15 points lead all scorers, as the freshman bounced out of a mini-slump, going 6-13 from the floor in a game-high 39 minutes. Freshman Nikki Dixon also played big minutes, scoring nine points, pulling down a team-high seven rebounds, and adding three assists in 37 minutes.

The Lady Tigers played a second straight game without the services of sophomore Chancie Dunn, who missed the game with a hip injury, and had been averaging nearly 30 minutes per game at the point and two guard positions.

Clemson took a 25-23 lead into halftime as Shaniqua Pauldo hit a jumper with six second remaining in the half, the first time Clemson led at the intermission in five games. Neither team gained much footing in the half, with the scoring staying within four points during the whole half. , which had four ties and four lead changes. Gramlich had ten of her points in the first half.

Following the ninth tied score of the game at 33-33, the Cavaliers scored six straight as Clemson turned it over on three straight possessions with 12:32 to play. The Tigers cut it back to three at 41-38 just a few minutes later at the 10:12 mark on a fastbreak layup by Gramlich from Dixon.

Egwu nailed a layup with 8:05 to play, giving Virginia a 45-38 lead, in what would be the final field goal of the game for the Cavs, who went 0-6 in the final eight minutes, but hit 15-19 free throws in the half to keep them afloat.

Clemson will play next at No. 25 North Carolina on Thursday night, a squad coming off an overtime loss to No. 5 Maryland in Chapel Hill on Sunday.