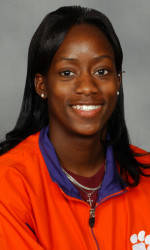 Ten members of the Clemson women’s track & field team took part at Saturday’s Gamecock Invitational at the USC Field House. The event served as final preparation for next week’s ACC Championships, which will be held at Clemson’s indoor track & field complex for the second time.

In the 55m dash, Ra’Sheena Parker and Kristine Scott both performed well. Parker was sixth in the prelims (7.19), while Scott was seventh-fastest (7.26). In the semis, both improved on their times. Parker was fifth at 7.14, while Scott ran a 7.21 time in that section.

In the pole vault, Beth Jordan finished in a tie for second with a clearance of 12’0″. That marked a season-best for Jordan, who happens to be the Lady Tigers’ all-time record-holder in the indoor pole vault.

Multi-event athletes Linda Buchholz and Liane Weber competed in Saturday’s shot put to improve on their existing marks. Buchholz finished fifth with a toss of 38’6.25″, while Weber came in eighth with a mark of 34’8.5″.

Catheryne Porter competed in the weight throw and was fourth with a toss of 48’11.75″.

The ACC Championships get underway Thursday, February 22 with the women’s pentathlon competition.